How Ulster counties got it right the next time 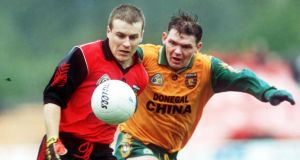 James McCartan: the 1994 Down All-Irealnd winning team was much re arranged from the team which won Sam Maguire in 1991. Photograph: Inpho

should Donegal win on Sunday, they would become the third team from Ulster in just over 20 years to win a second All-Ireland, an achievement unequalled by the other three provinces.

There are similarities between Down in 1994, Tyrone 11 years later and Donegal on Sunday. Should Jim McGuinness’s team be successful it would mean that all three counties would have had demoralising experiences between their first and second championship wins and somehow reconstructed their challenge.

In the cases of Tyrone and Down the circumstances differed. Tyrone endured a dreadful year as champions with the sudden death of their captain Cormac McAnallen early in 2004 before rebuilding a year later. Down were talented, clever, volatile but inconsistent. On message, they could beat anyone; distracted they could equally lose to anyone.

Mickey Harte’s team had the advantage of the qualifier system in 2005 but their key match was not the replayed Ulster final defeat by Armagh but playing Dublin in the All-Ireland quarter-final, which ended in a draw.

At half-time in the drawn match Dublin led by five and Tyrone looked in trouble but Harte reconfigured the team at half time, bringing Conor Gormley to centre back and Enda McGinley to centrefield.

The versatile Joe McMahon also went to the middle and did a good job marking the previously rampant Ciarán Whelan, an eye-catching defensive display in a season he closed out at full back, starting the All-Ireland final on the edge of the square.

Harte’s ability to find solutions on the hoof was evident in the year of Tyrone’s first All-Ireland when the team was nearly surprised in the Ulster final by a Down side that ruthlessly exploited their opponents’ aerial vulnerability to pillage four goals.

For the replay Harte redeployed the late Cormac McAnallen to full back and he ended the year with the All Star number three jersey.

What the latter team had in common with Tyrone 2005 was a team of personnel fairly similar to those who had won the first All-Ireland but shuffled around by manager Peter McGrath so that key players had new positions.

McCartan himself moved from corner forward to wing forward in a switch with Gary Mason. Barry Breen moved from centrefield to centre back and Conor Deegan from full back to centrefield.

“From a personal point of view,” McCartan recalls, “it was said back – although Pete never put this to me – that I was moved out to the wing to free me from Ciarán McKeever, who was felt to have been getting the better of me. Whatever the reasoning it had the desired effect. There were other changes. Conor Deegan went from full back to midfield and Eamonn Burns from midfield to wing back.”

Although the switches were a feature of the team that would win the All-Ireland the situation was also fraught by other tensions. Derry had won the All-Ireland a year previously and the draw pitted them against Down in the first round in Ulster in May 1994.

“What re-energised the team more than anything is the lambasting we got for our performances, like the Massacre in the Marshes [1993 defeat by Derry in Newry]. We got stinging criticism from the manager, which didn’t go down well with some of the senior players, and the public. There was also a winter of discontent – myself and Greg Blaney left the panel. Sometimes you have to look into the abyss before you get a reaction.”

Celtic Park in 1994 went down as the match of the 1990s, as Down put aside their differences and took down the champions. From then on, everyone knew that Down would be contenders and so it proved with an Ulster title and 20 years ago tomorrow, an All-Ireland in a prosaic final against Dublin. McCartan says looking back that it was the wrong way around.

“It was a strange one. As soon as we won in Celtic Park there was expectation but even when we actually did win the All-Ireland, people weren’t that impressed. Of course there were celebrations but the final was a wet day against Dublin and not a great game. I remember people saying that only Mickey Linden would have made the teams of the ’60s.

“I felt that if we’d played Dublin in May and that Derry game in Croke Park, none of the ’60s team would have been safe!”