Gutsy Garrycastle put it up to champions St Vincent’s 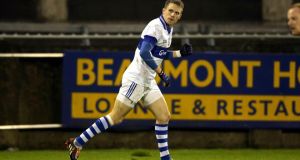 Although this turned out to be the result we all expected, it came in a manner that defied prediction. St Vincent’s have reached back-to-back Leinster finals for the first time in their history but they found a roundabout way of getting there.

Through pure carelessness, they ended up having to win this game twice. That they did it with such ease both times is about the only solace they can take from a frustrating afternoon.

With 25 minutes gone, Ger Brennan shuttled forward to kick a brilliant point off his left foot to put the Dublin champions into a 2-6 to 0-2 lead. The scoreboard at that stage was pretty faithful to the weight of Vincent’s dominance and if anything it undersold it a touch.

Their two-goal could just as easily have been five and Garrycastle were surviving on fumes.

Yet Garrycastle – and in particular Dessie Dolan – saw something else in the game. Dolan had the next point on the board within seconds of the restart and when the Vincent’s defence, by now a little shaky, started fouling in the wrong areas, Dolan added a free to bring the margin back to four.

Vincent’s were rattled, all the more so when a brave flick under pressure by Garrycastle youngster Michael Monaghan sent Dolan in for a goal.

The 35-year-old finished under huge pressure, low to Michael Savage’s left corner and in the space of 11 minutes either side of half-time, a 10-point lead was down to one.

It took a brilliant stop from Savage to foil a Gary Dolan shot soon afterwards and stop Garrycastle going ahead.

“That could have been the turning point in the game,” said Dessie Dolan Snr of Savage’s save. “That was a great goal chance and we had a couple of chances for points after that that we didn’t take. We could have gone three or four points ahead but that was it. That was our chance to change the game.”

As it was, they only scored two more points. Vincent’s, having not scored for 20 minutes, closed the game out with 1-3 in the final quarter. Mossy Quinn kicked a free, slotted a penalty and knifed a point. Brennan came forward to hoist one off his right. Diarmuid Connolly was quiet enough most of the day but involved himself in 1-2 of that 1-3. When they had to do it, they did it.

“We made it tough for ourselves,” said Quinn.

“We turned over the ball quite a bit and they capitalised on that so it turned out to be a bit of a weird game. We played well for 20 minutes and then left ourselves a lot of work to do. Credit to them, they never gave up. They kept going, kept fighting and played good football. It’s a testament to them how close it was in the second half.

“But you can’t just play well for 20 minutes. It’s not good enough. You have to keep going. It’s a strange feeling. We’ve won a Leinster semi-final by five points and yet we’re walking out of here feeling disappointed.

“But if you make a habit of watching 10-point leads eroding in front of you, you won’t be around too much longer.”

Chiefs survive loss of Mahomes as Brady wins battle of the veterans 12:04
Bríd Stack released from hospital with no spinal damage 11:46
The Offload: Ronan O’Gara more than willing to take a punt on Jack Crowley 10:00
Spirited finish allows Kevin Na to win Sony Open 09:09
All in the Game: Glowing tributes few and far between for departing Özil 09:00
Crossword Get access to over 6,000 interactive crosswords