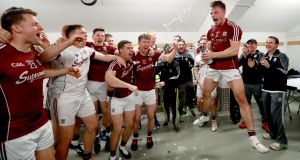 Galway tucked away their 45th Connacht football title in MacHale Park with a performance of structure, movement and scoring power that simply buried Roscommon.

Kevin Walsh’s team will look forward to the hard ground and hopefully hot afternoons in Croke Park when the All-Ireland series gets into full swing because for all their fondness for the Castlebar venue, where they deposed the champions Mayo and on Sunday became their successors, they have played two and a half of their three matches to date in bleak, rains-wept conditions.

In the remaining 35 minutes, this Connacht final replay’s first half, they availed of the warm if overcast afternoon and firm surface to run riot against a Roscommon side that conceded early scores and in the anxiety to hit back were picked off for even more.

Watching Galway attack, from the centrefield engine room of Tom Flynn and especially Paul Conroy - the influence of which Niall Daly was this time unable to counter - to the lethal incursions of Shane Walsh and Danny Cummins - who finished with 2-1 from play - and the wrecking ball that Damien Comer became until his questionable dismissal on a black card just before the hour, it was pretty obvious that Roscommon had done the practical thing by opting for a sweeper defence in Salthill during the drawn match.

They tried the same thing this time around with David Keenan dropping back as an extra defender but as a team they don’t operate that system as comfortably as Galway and when the pressure came on - and it came early - Roscommon didn’t succeed in serving too many restraining orders.

The winners attacked from the start. Comer was wide and Walsh short in the early flurries but the pressure told. In the third, fourth and fifth minutes Eoghan Kerin, up from corner back, Gary Sice with a free and Eamon Brannigan all scored points: bang, bang, bang.

When Cathal Cregg sliced through the Galway defence to threaten goal immediately afterwards the difference was clear. He failed to get the shot away quickly enough and with that the cover converged and swallowed him.

The one bright spot for Roscommon was the valiant efforts of captain, Ciarán Murtagh, whose opening score, screwed over from the right-hand corner, was a precious-metal moment for his team on an afternoon of dross.

Among the mysteries - sorrowful or glorious, depending on your provenance at the final - was the poise and composure of a Galway team, who have spent their spring time in recent years failing to get out of Division Two and the embattled chaos that descended on a Roscommon side who had looked very promising in their progress to league semi-final last April.

Primarily Galway had a tungsten core: a centrefield of great athletic and ball winning ability, which provided the springboard for the relentless attacks, a defence that held its shape well, fluid on the attack and massed-ranks when shutting up shop plus an attack in which Walsh’s promptings on the 40 created constant danger and Comer’s presence as a target man was left in curious isolation at times.

Special mention should be made of full back Declan Kyne, who delivered yet another terrific display in his debut season as a late comer to senior championship.

He created difficulties for Senan Kilbride, brought in at full forward, in the initial stages with close-quarters marking and if the St Brigid’s forward dropped back to kick a good point Kyne also ran rampant up the field with several counter-attacks and has been the most noticeable full back of the championship to date.

Cummins’s first goal just within 20 minutes effectively killed the match. His finish capped great team work and within a minute Comer had kicked a point to make the score 1-5 to 0-2 and that early, it was already very difficult to see Roscommon getting back into contention.

Their defence had become more porous as they tried to chase a contest already running away from them faster than they could watch it.

There was a sense of resignation and shock when Gary Sice danced through from a line ball, conceded to a poor kick-out after a Galway point, to rifle the ball into the net in the 23rd minute.

Roscommon joint-managers Kevin McStay and Fergal O’Donnell conceded that the match had been effectively over at half-time when they trailed 0-5 to 2-9.

Their team battled away to an even contest in the second half but only if the distortion of a 10-point deficit is ignored. Half of the team’s total was scored by replacements - including Donie Smith who came on as a black card replacement for Keenan and also picked up a red card for his second yellow late in the match - but Galway kept track and Cummins ran in a third goal after judging perfectly the bounce of Sice’s kicked pass in the 56th minute.

It was the end of the end and came just after Kilbride had seen a goal chance rattle Galway’s bar at the other end.

The winners had retreated into lock-down and their impregnable lead was whittled to a small extent as they confined their opponents to occasional shots for points.

Galway take their first provincial title in eight years into the All-Ireland quarter-finals where they await opponents who will emerge from Clare, Derry or Tipperary. Roscommon head for next week’s qualifiers where they will be drawn against Clare or Derry.