GAA Statistics: Cillian O’Connor is the most relied upon forward and needs a deputy 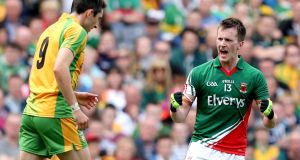 When Mayo notched up 2-16 without their talisman Cillian O’Connor in last month’s championship opener you’d be forgiven for underestimating just how integral he is to the Connacht champions.

Playing one minute of championship football, not to mind 65, without their prized marksman has Mayo fans sweating. The last time they won a championship game in which he did not start was the Connacht semi-final three years ago - yet their combined winning margin from that game and last month’s encounter was 25 points.

The two wins though came against a Roscommon side in transition, and London - currently three tiers below the Westerners. In truth O’Connor is probably the most important footballer in the country and without him Mayo would be right to stress.

This year they were fortunate to avoid relegation from the league – with scoring difference salvaging their Division One status. They certainly struggled without the Jordanstown student who was absent from their attack for five of the seven games.

The 24-year-old corner-forward has struggled with injury during both this year’s and last year’s league campaigns - and in his absence Mayo have won only 22 per cent of their games. In the games he has featured in though, this winning ratio rises considerably to 80 per cent. Within that Mayo’s average score per game rises from 0-13 to 2-12 with O’Connor pulling the strings.

He is a set-piece specialist - a classy, physical operator who is mature beyond his years. As dangerous poaching around the square as he is playing puppeteer around the D, O’Connor has managed a hugely impressive 14-102 over the last three championship campaigns. He has finished as the championship’s top scorer in each of those years - with an overall average of eight points per game. That total breaks down as 38 per cent from play, and 62 from placed balls.

Of those counties that have regularly been in the hunt for Sam Maguire since 2013, there is no doubting that O’Connor is the most relied upon forward. Yes, because of his quality, but also because of Mayo’s lack of consistent score-getters elsewhere. He's scored 41 per cent of Mayo's championship total in those three years.

His closest competitor is Conor McManus of Monaghan. He’s been responsible for 38 per cent of Monaghan’s scores. Another man practically carrying his county’s offence.

Meanwhile 2014 Footballer of the Year James O’Donoghue has managed 22 per cent of Kerry’s scores. Like O’Connor and McManus he is a top attacker, but he’s part of a Kerry team that could win an All-Ireland final (2014) without him even managing a score.

With respect, Mayo’s forwards have failed to similarly step up when O’Connor has either been missing, or has had his influence curtailed.

In the 14 league games over the past two campaigns Evan Regan has scored 1-24 - not bad when you consider he’s only just broken into the reckoning and has had his own injury problems to contend with.

Behind him in the scoring charts though is Cillian’s brother Diarmuid and Robert Hennelly. A wing forward and the goalkeeper. They have only managed 10 points each (2-4 for O’Connor).

Of the 18 different scorers over that period - only half of them are forwards.

Against London last month though, albeit Division Four opposition - young Regan followed up on those flashes of promise. He slotted over seven points in Ruislip, ably taking over free-taking duties.

Following Cillian O’Connor’s dismissal via a black card on the six minute mark another to put his hand up in that win was Conor Loftus. The go-to man for the county’s All-Ireland winning Under-21 team a few months ago - Loftus replaced O’Connor and scored 1-2, replicating his form for the Under-21 side in which he scored 2-13 in four games.

O’Connor will be back in action this Saturday against Galway, and while he will no doubt be shouldering the load an able deputy could be the missing ingredient for Mayo.

Kerry will not be reliant to any such degree on James O’Donoghue, while Dublin certainly will not pin their hopes entirely on Bernard Brogan.

And while Aidan O’Shea’s deployment at times last year did lift the burden off O’Connor - an alternative consistent scoring threat was still ultimately vacant.

Their opposition, Galway - have far more problems. Kevin Walsh has named a team depleted of some of the finest talent in the county.

Exodus to the US

The likes of Johnny Duane, Michael Lundy and Fiontain O’Currain are focal points of the team. All three will spend the summer playing football in America. And they are not alone, highly talented graduates of recent Under-21 and minor sides such as John O’Brien, Michael Daly, Ronan Steede, Martin Farragher and Ian Burke are also stateside.

In fact - Galway as a county have this year been most affected by sanctions and transfers to clubs in the US and Canada.

Already this year, with over a month left for players to make their move for the summer via player sanctions with either the North American County Board, the New York or Canadian equivalents, or the GAA’s J1 sanction - 50 players from Galway have departed. That’s by far the highest number for any county - next up is Cork with 31.

In 2012 there were 50 Galway players who played football and hurling in American clubs, not even including New York. Interestingly that was the year between their Under-21 All-Ireland triumphs in 2011 and 2013. Over the last five years Galway have also been the most affected by the J1 sanction.

The lure of the US then is certainly a reason for the county’s failure to follow up on their All-Ireland minor title and two Under-21 triumphs in the past decade.

Next Saturday though is the time for new stars to rise.

The former Sligo goalkeeper was man of the match as New York rocked Roscommon last month.

A regular with Down in 2013, having emerged as a promising minor in 2009. He's been with New York the last three years.

Former Dublin All Star is on a sanction this summer to the States.

One of Westmeath's most promising young defenders, Holloway will spend the summer in the US. A huge blow to the Lake County.

A star of the county's recent underage teams, and a Sigerson Cup winner with DCU.

Duane captained New York against Roscommon - a regular for Galway before that at corner or centre back.

Like his brother Conor, one of the most talented young defenders in the country. Will spend the summer in Chicago.

The big midfielder will be a monumental loss for Galway this summer. Has been struggling with injury and is expected in the US in the coming weeks.

Following the defeat to Dublin, the youngster is off on a J1 sanction to Chicago.

Corofin and Galway attacker Lundy will be shooting the lights out in New York this summer.

From a family steeped in Offaly football, Connor is the fourth man on this XV to line out for New York this year. He moved to the city in 2014.

Kildare will be without this sharpshooter as they look to break Dublin's grip of the Leinster championship - instead he will play for Cavan in the New York championship.

'Hero of the future' - Under 21 footballer of the year three years ago. The Corofin corner forward will spend another summer on a New York sanction.

Younger brother of Donie, Kingston looked set to nail down a spot in the Laois XV this summer. Instead he's in Boston, but he makes this XV.

What can you say? The best club footballer in Ireland. Has never really been around long enough to replicate that for Armagh. He'll spend the summer in America again this year.