Epic second half sends Mayo and Kerry back to try again 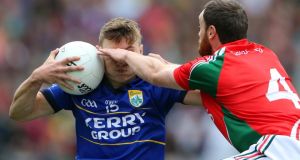 By half-time, yesterday’s GAA All-Ireland football semi-final had proceeded in conformity with the dampish-squib nature of this year’s football championship. Mayo’s epic quest for the Sam Maguire looked done, as they trailed in four points behind and were a man down.

This unpromising situation for Mayo was compounded by the zip and confidence increasingly demonstrated by Eamonn Fitzmaurice’s young Kerry side. Yet the Connacht champions piled all of these unwelcome realities into a heap and ignited a fireball of a second half, which transformed a drab contest into the match of the football championship to date.

Sometimes it’s a failure of imagination to say that a draw was a fair result, but what is accurate is that both sides had to endure the icy stare of certain defeat before somehow surviving to fight again next Saturday evening in Limerick.

Mayo manager James Horan said the county would make a protest about the venue but at half-time the Mayo supporters in a crowd of 52,495 probably would have taken a replay in Dingle.

A point by Andy Moran – who, as anticipated, didn’t start but came on for the last 20 minutes and made a big contribution – was confirmed by Hawk-Eye in the 66th minute and they led by five, 1-16 to 0-14, and a magnificent comeback looked confirmed.

It was time for Kerry to pull a rabbit out of the hat and they did just as required by finding 1-2 in the remaining few minutes. Replacement Kieran Donaghy rewound his career to take a high ball in front of goal and feed James O’Donoghue, who slammed in a goal to leave just a point in the difference – Donaghy having already been fouled for a free, converted by another replacement Bryan Sheehan –- in the 68th minute.

Another player who had started on the bench, Kieran O’Leary, expertly polished off the equaliser in injury-time to leave both sides wondering how they had let it go.

Mayo began with Alan Freeman in for Andy Moran and Jason Gibbons for Chris Barrett. They set up defensively, bracing themselves for James O’Donoghue. Keith Higgins marked him, with Tom Cunniffe dropping back to double-team the operation.

O’Connor, acting captain on the day, was one of the main providers of deliverance in the second half, but his first half featured some uncharacteristically inexpert finishing.

Kerry’s confidence grew with the opposition misses. They were getting away with it at the back while stretching Mayo up front. Their centrefield of David Moran, who had a couple of very good passages, and Anthony Maher was doing better than expected and they began to let loose some accurate shots from distance.

Moran, twice from around the 45, Johnny Buckley from more than 30 metres and Donnchadh Walsh, circa 40, all bombed points and the lead began to stretch.

Calamity befell Mayo just before half-time when Lee Keegan kicked out at Buckley after a free had been awarded in front of referee David Coldrick.

Many felt it was an unduly harsh, letter-of-the-law decision but in reality Keegan left the official no choice, and he can console himself that his team’s great revival leaves open the prospect of playing in the All-Ireland final should Mayo win the replay.

Pessimism deepened for the Connacht county within 20 seconds of the restart, when O’Donoghue got loose for a point to extend the lead to double scores, 0-10 to 0-5.

The match turned in Mayo’s favour for a few reasons. They weathered early Kerry scores – Paul Murphy added to O’Donoghue’s initial point – and started to fire straight, themselves.

Alan Dillon was instrumental with a galvanic performance in the third quarter. When Mayo desperately needed to believe in their comeback, he lit the way with a couple of fine points, including a soaring effort from out on the right that dropped over against the backdrop of great revivalist roars from the now highly vocal red and green support.

Within a minute O’Connor had equalised from just inside the 45.

Mayo had abandoned the early ball strategy of the first half and were protecting possession by running hard at the middle of the Kerry defence, a perceived vulnerability that had gone largely unexploited in the first half.

Kerry managed to nip back in front twice, although O’Donoghue’s lead point at 0-13 to 0-12 should have been a goal. Colm Boyle, with nearly 30 possessions a magnet for the ball, misjudged a dropping ball and the lethal Kerry forward streaked in only to hit his shot too high.

As nerves began to fray, Cunniffe did something similar but Paul Geaney was even more forgiving and hit a chance wide.

Mayo went decisively in from with a 59th-minute penalty after Vaughan had been nudged in the back by Peter Crowley. O’Connor converted confidently and quickly added a point and later a free.

Crowley, who had a good match at wing back, got Kerry’s first point in nearly quarter of an hour to cut the deficit to four before the final act played out.

Kerry had the last chances at the death but O’Donoghue was wide off the post and a late, long-range free by Sheehan was plucked from the air by Séamie O’Shea to confirm the draw, which for both sides was preferable to the at times all- too-visible alternative.