The young manager likes consensus, but he likes to overturn it too when required 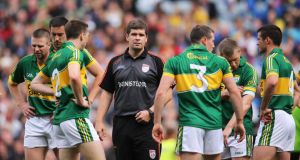 Kerry manager Eamonn Fitzmaurice before the 2013 All-Ireland SFC semi-final against Dublin at Croke Park. Kerry lost but such was their performance the young manager emerged with his reputation actually enhanced. Photograph: Cathal Noonan/Inpho

At half-time in the 2006 All-Ireland final, the Kerry dressing room was a crankier place than it ought to have been given they’d just posted a lordly 3-8 in the first 35 minutes. The level of vexation was rooted in the fact there was still a game to play at all. They should have been passing around cigars at that point but instead the place was a Babel of recrimination.

“I came in bulling because Mayo had scored three goals,” remembers Jack O’Connor.

“There were six goals scored in the first half and we came in only six points up. There was roaring and shouting in the dressingroom, with me as responsible as anybody because I felt we should have had the game killed off by that stage. We should have been out of sight.”

Eamonn Fitzmaurice had been in and out and up and down with O’Connor all year. Shifted up to centre forward for the league (and not particularly happy about it either), he was dropped early in the summer.

“But in fairness to Eamonn,” says O’Connor, “he was the first one to stand up and go, ‘Lads, come now, everyone calm down a small bit. We’re six points up here, don’t forget that. We’ll steady the ship and we’ll be okay’.

“He was always very knowledgeable and wasn’t afraid to voice his opinion. He was a strong voice in the dressingroom and it was obvious that he was a very shrewd thinker on the game.

“When you coach fellas, you know that ones who will turn into managers. You can see who has the mindset to do it. That good team from ’04 onwards had a few of them but he certainly stood out.”

When O’Connor came back for a second stint on 2009, there was never going to be a shortage of potential selectors around Kerry to bring in beside him. Yet he went for Fitzmaurice who was still only 32 and still a mainstay for his club.

That he was, and would remain, lifelong friends with more than half the team didn’t concern O’Connor. Probably helped, if anything.

Interviewed in these pages last year, Fitzmaurice described his role back then as “more assistant manager than selector”. He watched matches that O’Connor couldn’t. He did the warm-up with trainer Alan O’Sullivan. He played in training matches when the numbers were odd. He took responsibility for video analysis.

Though the video thing is dismissed now by O’Connor as a matter of the younger man being “less technologically challenged”, Fitzmaurice fundamentally changed the way Kerry approached that aspect of preparation. Video analysis had become a bit like Mass. They congratulated themselves for having done it even if they were sceptical enough as to the good it was doing them.

When there was video to be watched, it was done after training down in The Malton or The Brehon, or wherever the post-session meal was held. Invariably, it was the last thing to be done before players went home for the night, some stragglers with half-finished plates balanced on their knees.

Those with a drive south or west ahead of them didn’t need it dragging on but even with the fullest heart, players got fidgety and bantery the longer it went.

Fitzmaurice took it seriously and insisted there was a serious purpose to it. To convince the players, he moved it away from the post-training sessions.

Instead, video clips were shown before training and the players were given specific things to work on during the session off the back of them. Regulation stuff in 2014, it was a revelation for 2009 Kerry.

Quietly, insistently, his reputation for diligence and deep thinking grew. One story told after the 2009 All-Ireland final against Cork had him watching so many repeats of Cork’s matches in the week before the final he fell asleep on the couch on the Wednesday before the game.

Spin the tape on by just three years and he was the Kerry manager. Having done wonders with Pobailscoil Chorca Dhuibhne and having kept the Kerry under-21s competitive, his knowledge of the underage scene was a help. But it wasn’t the main factor.

O’Connor encouraged him to do it on the basis he would have the immediate backing and respect of the dressing room. “It was a no-brainer all round as far as I could see,” says the former manager.

A sense of Fitzmaurice’s independence and lateral thinking was visible in the appointments he made. He knew he’d take plenty of heat for going outside the county and making Kildareman Cian O’Neill a selector but he did it anyway.

Moggan is a man of many hats, from vice-president of Paralympics Ireland to coach of some of the best coaches Ireland has seen across all sports.

Billy Walsh, Brian Kerr, Gary Keegan and more all came through his hands. Fitzmaurice brought him in as a performance coach and for the past two years, Moggan has watched the younger man flourish.

“I often talk about the what and the how of coaching. Eamonn’s how is all about courtesy and humility. The what is the knowledge and he really knows his football and he’s very articulate in his ability to clarify to players their role.

“He listens to others. With Diarmuid Murphy and Mikey Sheehy and Cian O’Neill particularly – they are a team. He listens very much to others and takes their strengths and opinions. And then he is very strong as the leader.

“He is very good at going, ‘Right, I’ve listened to everyone, now this is the way we’re going to go about it’. Cian would be a very strong ally in that four.

“I love the way he watches things. Good coaching doesn’t look good on the telly. The sound bite prove nothing. Because good coaches don’t know a lot of the time. They’re watching, spotting players.

While it’s still early days and tomorrow is only his eighth championship game as Kerry manager, it’s already clear the technical, tactical side of the game is an area where Fitzmaurice isn’t exactly crowded out for peers.

He has specialised in overturning consensus, whether it be moving Colm Cooper out the field to find him more space or pushing up on Dublin’s half-backs to get them turning and defending in last year’s All Ireland semi-final.

It’s a rare thing for a Kerry manager to come away from a seven-point defeat with his reputation enhanced but Fitzmaurice did. Sometimes the other crowd are just better than you. They plan and scheme too. And sometimes the ball just doesn’t bounce for you.

But that doesn’t mean you stop. In Kerry, you can’t. Fitzmaurice faced into this summer without the player of his generation and off the back of a league that ended with a hiding from Cork in Tralee.

And then he brought Kerry to Páirc Uí Chaoimh, reinvented Declan O’Sullivan and thoroughly outsmarted Brian Cuthbert and the Cork sideline.

“He got his tactics pretty spot on against Cork,” says O’Connor. “Kerry set up fairly defensively but made sure they broke at pace and found the three guys they left in the forwards who did a lot of clever running into space. There was only one winner on the sideline that day in the tactical stakes. “The way Kerry set up against Cork was a direct consequence of the league game in Tralee. Brian Hurley kicked eight points from play that day and there was no way Eamonn was going to give him that kind of space again. Cork went away from Tralee that day delighted with themselves but in the long run, I would say that Kerry took a lot more from the game.

“It’s very hard to create something without a context for it. And Eamonn came away from that game with his context. He was able to work on it and prepare a game plan for the Munster final on the back of it.”

Kerry have no real context for Galway but Fitzmaurice was in Tullamore last Saturday night, in search of one. Watching. Noting. Gaming it out.

Nothing else will do it.