Dublin are more streetwise but are they still too nice? 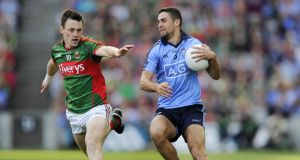 Dublin have developed a more defensive system this season but as they struggled in the All-Ireland semi-final replay, James McCarthy attacked the Mayo rearguard with gusto. Photograph: Tommy Grealy/Inpho

When the National League started this year, Dublin wasted no time in presenting themselves as a different proposition. Absent was the stunning, omnipotent model that had gone up in flames in the 2014 All-Ireland semi-final against Donegal, a defeat that was arguably the biggest championship shock of the modern era.

Dublin had learned their lessons and quickly convinced onlookers they were willing to mix it anyway teams chose. They gave as good as they got on a bitter-tinged day in Killarney against All-Ireland champions Kerry. They ground out a draw when Mickey Harte brought an ultra-defensive team and gameplan to Croke Park. They came to Castlebar and stunned the locals by piling 2-18 on Mayo in a performance which had its origins in sticky defence rather than all-out attacking flamboyance.

They were happy to participate in a league match on a dismal Saturday night in late March that was immediately denounced as the nadir of the modern game.

Derry managed 0-4 but Dublin hit just 0-8. It was as if they were determined to show that they were just as happy when games were down and dirty.

They ended up winning the league title with a comfortable win against Cork. John Small was probably the choice performer of the spring campaign. In duly collecting a 10th Leinster title in 11 years and advancing to the All-Ireland final, they unveiled a defensively diligent system which revolves around Cian O’Sullivan as a deep-lying sweeper.

They are on the threshold of a third All-Ireland title in five seasons, a feat which would elevate them into the company of all-time teams. And yet as the hours tick down to the 128th All-Ireland final, we find ourselves asking a curious question: who are Dublin right now? Are they a different team to last year?

“I felt that throughout the national league, Dublin were too preoccupied,” says James Horan, whose Mayo team played in the 2013 final against Dublin and who stepped down as manager of his county last August.

“They have over-analysed the Donegal defeat and everything that went with it and it was as if they felt they had to tear down everything and start again.

“They tried things out and had John Small in various positions. But they have ended up with a player, Cian O’Sullivan, who is a fantastic nuts and bolts player.

“So they have him in a more defensive role so that before a ball is kicked he is back trying to influence the kicker of the ball. He is covering one side of the back line or the other and he is also there to win high ball if it comes in.

“And Paul Flynn also spends more time in the half-back line than he ever has. That is really what it is.”

When Dublin visited Monaghan on Easter Sunday, a bumper crowd turned up to see what was a repeat of the previous summer’s All-Ireland quarter-final. Dublin had been imperious in that match: their 2-22 to 0-11 win against a hardened and crafty Ulster side who played a heavily defensive game made them look absolute certs going into that famous semi-final against Donegal.

However, by the following April in Clones, Dublin had been significantly recalibrated. They won the match but afterwards Jim Gavin found himself answering questions about his forwards tracking back as auxiliary defenders.

He suggested they were merely marking their men but it seemed like further proof that Dublin were road-testing a more conservative set-up.

By then, much of the hotter talk about Dublin – that the county was set to overshadow the All-Ireland for years and years through sheer talent and numbers – evaporated, to the relief of Jim Gavin and the senior squad.

But even as they won the league last spring, they went through a very public re-evaluation of their priorities. They were like a trapeze act which had spurned the safety net and then fallen.

All of the defensive machinations were, understandably, designed to ensure they would never again leave themselves as open as they had been against Donegal. Before that semi-final, there was a vague acknowledgement Dublin’s all-out style left them susceptible in defence but nobody had figured just how thoroughly they might be ransacked.

John Duffy, the former Donegal player and a selector with Jim McGuinness last summer, agrees Dublin have changed in shape and mindset since that day. But he is not convinced they have made the sufficient shift in attitude necessary to actually beat Kerry tomorrow.

“Yes, they have changed their tactics – to a certain degree. They have realised that you can’t just gung-ho attack and outscore opposition every week. So I think Jim Gavin has changed the style of football they play and that has made them a more serious contender this year.

“I do feel they are a better rounded team this year. How and ever, I feel that Dublin are nowhere as near as cynical. Kerry are the most cynical team I have watched in many, many, many years. They are not being penalised for that. And I feel that Dublin want a more attractive open style of football.

“It is lovely on the eye. But for winning trophies, you need to play to the level of the rules – to test the limits of those rules. And Kerry do that very well in order to win games. Knowing when to foul and where to foul, slowing the game down. And on top of that, they play very clever football. They are very well coached and drilled and are masters at closing a game out. I think Dublin are too nice.”

The Leinster championship seemed to confirm business as usual for the Dubs: a dazzling array of gorgeous scores to lift the tedium of the absolute thumpings they handed out to other counties – 4-25 versus Longford, 5-18 on Kildare and then 2-13 to Westmeath’s 0-6 in claiming the Leinster title.

Still, the jury remained out until Dublin met a top-tier side. Fermanagh were the surprise card in the All-Ireland finals and if the Dubs won comfortably, the Ulster team still managed to hit them for 2-15. By then, Pete McGrath’s team knew to expect Cian O’Sullivan operating as a sweeper but, in review, they found Dublin’s approach further out the field a tough nut to crack.

“He is a very important piece of the jigsaw,” says Raymie Johnson, the Fermanagh selector. “Obviously they have enough strength in depth for people to come in if he isn’t fit. But because they are so physically strong and well conditioned, if you don’t move the ball fast and you take balls into the tackle – which we found out when we played them – they will turn you over.

“And then the pace and scoring prowess counts. Teams have tried to get around that by attempting to score from further out. But what you need is patience and then you can get in behind them. But I think Dublin are streetwise at this stage and they know what they are going to come up against in Kerry.”

That quarter final was sufficiently strange to leave a few question marks over Dublin ahead of the Mayo semi-final. Stephen Cluxton appeared to be rattled in the Fermanagh match and that uncertainty travelled with him in the drawn game against Mayo. James Horan felt that the doubts which had accompanied them all year surfaced that day.

“Dublin lost their own confidence, I feel. They started to doubt the way the play and their attacking philosophy. Everyone, internally and externally, was talking about that. They started off very shaky in the league and going into the Leinster championship they looked to be going good.

“But coming into the Mayo game I felt they were still doubting themselves. That confident, front-foot football, they sacrificed it. They were tentative. So I feel that is why the replay against Mayo was such a big game for them. Because they said ‘let’s stick to our principles a bit more’ and they went for it. They were more aggressive. James McCarthy was driving forward more. I feel that they talked themselves into being tentative all year until they reached that point.”

Crucially, they came through it. Horan believes Dublin untethered –pouring through and just attacking – is their most natural state of being.

“I think that is when they are most dangerous and when they really frighten people. Now I do agree that when they don’t have the ball they need to keep their shape a little bit more. Always keep two in the half-back line, don’t follow everyone man for man. That is when they can be exploited. But that is very minor tweaking. My sense is that they over compensated and became an ordinary team, to a certain extent.”

It means they have reached the All-Ireland final without anyone fully realising which inner team has got them there. Was it the more cautious 2015 model? Or was it the unstoppable rush-and-a-push few minutes which saw them bolt away from Mayo in five minutes flat?

In a process of self-discovery that has engaged Dublin for a full year, we will know the answer after the final 70 minutes of the All-Ireland season.