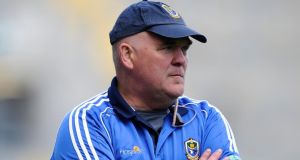 For a man who had tamely lost a Division Two final, and harshly lost one of his key players, Jim McCorry was a picture of calmness. Instead, the only real worry for the Down manager was the pre-match injury sustained by Mark Poland.

“We lost Mark Poland in the warm-up, just before we got into the huddle,” explained McCorry. “It was a bad [eye] injury, and Mark had to go to the hospital. He actually caught his right eye with the ball full force and we were concerned about the vision.

“Mark has been fantastic this year, has been back to his old self again, a great deliverer of the ball, and sets everything up on that inside left line. So that interrupted us a wee bit.”

Indeed, McCorry hardly made any fuss over the loss of centre back Brendan McCardle just before half time for two seemingly soft yellow cards. There were other things McCorry wasn’t happy about.

“Listen, it happened. It’s done and dusted. The disappointing thing is that we had a red card the last time we played against Roscommon as well. But we don’t want to cry over spilt milk. Roscommon have come up from Division Three, and they’ve now won Division Two. They’re well-organised and they’ve a good underage group coming through. So with or without those decisions it would have been tough.

“And sometimes you see the 14 men rally harder and win the game and, in fairness to the guys, they battled really hard. But probably the other turning point was the quick turnaround at half-time when they rattled off four scores without reply.

“We made a couple of adjustments on their key players but it didn’t work and we will learn from that. The objective was to get into Division One, which we have done. It would have been a nice bonus to get the Division Two cup, but we still got what we started out for.”

So too did Roscommon, although manager John Evans admitted that Down never recovered from losing McArdle. “I think it took from the game a lot. The first half, to me, was a damp squib. I didn’t think either team was going anywhere, both teams going flat across the field, and not the style of football we wanted to play, or I am sure Down wanted to play either. But there were a few harsh words at half-time, we straightened out game and went at them, and kicked some very good scores from play.”