Donegal hold their nerve to see off battling Tyrone 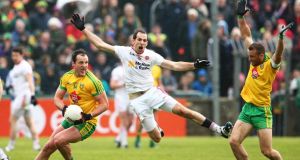 Donegal’s Michael Murphy and Neil McGee with Justin McMahon of Tyrone during the Ulster SFC preliminary round game in Ballybofey. Photo: Cathal Noonan/Inpho

At a windy and wet Mac Cumhaill Park, Donegal and Tyrone served up a prototype modern Ulster championship encounter. Dominated by defensive concerns, it still sparked with some fine scores, excellent saves from both goalkeepers, a half-time row, two red cards and a contest competitive until the dying minutes.

Tyrone felt partially vindicated because they had exceeded expectations, which had been fairly low given how little has separated the counties in recent years but once again they were beaten by a Donegal side, more practised and accomplished in their defensive system and with the nerve of a poker player when it comes down to tight finishes.

That the champions now proceed to take on Armagh in a re-run of last year’s All-Ireland quarter-final can be attributed to all the above collective strengths but also to two big individual contributions.

Captain, Michael Murphy’s assassin’s dispatch of three dead-ball awards, which took the score from 1-10 each to the final result, paved the way for the victory at the end of a deeply frustrating match where he was hounded on and off the ball by the suffocating and not always regular attentions of Justin McMahon, as mildly protested by Donegal manager Rory Gallagher afterwards.

Goalkeeper Paul Durcan is the current All Star and he made a vital save at the end, scrambling to paw away a fisted attempt at goal by Peter Harte in the 67th minute.

Another fisted effort by Colm Cavanagh came back off the cross bar in injury time and Matthew Donnelly drilled a loose ball narrowly wide, as Tyrone battled frantically to save the match.

The foundations for the win were laid by some classic Donegal play, smotheringly tight at the back and erupting into counter-attack with little pods of players running support. It was most obvious in the goal before half-time that stymied Tyrone’s second-quarter revival but also visible in other scores.

Another familiar factor was the display of Colm McFadden, a late inclusion for his namesake Hugh and who worked hard at the dual roles of lone wolf up front, kicking a point despite a bevy of defenders in the 12th minute, and working hard farther out the field.

During the initial phase of the match Tyrone were at sea. They might have pressed higher up the pitch where Donegal sometimes fumbled possession but withdrew in keeping with their defensive strategy. Yet when they got on top towards the end of the half they were a little over-enthusiastic in committing to attack, allowing their opponents sweep through the middle and set up the critical goal chance in first-half injury-time.

Earlier it was Tyrone who scored a rare goal in this fixture – the first in championship since their last win over Donegal eight years ago – to erase much of the damage done by the champions’ early blitz, which saw points flying over from Frank McGlynn, Patrick McBrearty, Christy Toye and Martin McElhinney.

Darren McCurry scored the goal in the 10th minute, taking advantage of good work by Peter Harte, who had a very good afternoon in Tyrone’s attack, to slip in from the right and plant the ball in the net. It was a glimpse of the Edendork corner forward’s menace on a difficult afternoon when he missed three frees and played far from goal in the second half.

Although Donegal steadied with a couple of points their opponents had found a vital measure of composure and began to compete. Seán Cavanagh and Harte with support from defenders getting forward – McMahon, Ronan McNamee and Matthew Donnelly all getting in on the scoring.

Just as it looked as if Donegal were going to be in the unusual position of trailing at half-time, they turned the match in injury-time. A break-out move looked to have been snuffed out when Odhran Mac Niallais’s shot was expertly smothered by O’Neill but the rebound fell for McElhinney, who finished the ball to the net.

It was a reprieve for Donegal, who had begun to look anxious and their discipline suffered, conceding frees and yapping them forward by back-chatting referee Joe McQuillan.

At half-time they led by two,1-8 to 1-6, as a brief scuffle broke out when the teams were going in – Tyrone selector Gavin Devlin pushing Murphy on the way off.

It became clear after the break though that Tyrone weren’t going to leave it at that and within a few minutes of the re-start they were level, thanks to a Cavanagh free and the first of 12-minute salvo of three points from Connor McAliskey – the third of which was a superbly nimble shuffle through heavy traffic that created space out of nothing for a shot.

The problem for Tyrone was that their build-up was ponderous and lacking penetration. Time after time the  ball was slung around, frequently going in the opposite direction to the Donegal goal and often getting turned over.

Donegal were more clinical, creating overlaps, as in McBrearty’s second point and finding support runners, like the excellent Karl Lacey, who also scored.

O’Neill was also required to make critical saves from McBrearty – McGlynn sending the follow-up wide – and McFadden to keep out Donegal goals.

Both sides were reduced to 14 when Neil Gallagher received a second yellow in the 64th minute and three minutes later Seán Cavanagh was black carded following an earlier yellow – for taking down an opponent.

The match ended with McGlynn swooping on a stray pass as Tyrone chased salvation and Murphy’s kicks – two frees and a 45 – had done their job.