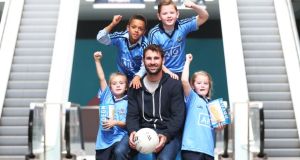 It wouldn’t be a proper heavyweight contest without a few verbal punches thrown in advance. And for Bryan Cullen, gloves now off in the more literal sense, Dublin are ready to float like a butterfly and sting Kerry like a bee.

Cullen is saying it as he sees it: Dublin’s 2011 All-Ireland- winning captain retiring at the start of the season and therefore fearless of the jinx. So, he says, Dublin’s extra 70-minute round against Mayo was exactly what they needed before the final showdown on Sunday week, while Kerry’s four-week wait can’t be ideal.

“And I thought Dublin vastly improved, but then I expected that, to be honest. Coming into the Mayo game, and it was well documented, we hadn’t had a very tough game since the end of the national league.

“And as they say about replays, it’s all about who learns the most. And once Dublin got their noses in front, they showed much more composure, held onto the ball, which meant Mayo couldn’t sit back, had to go out and chase it. And Dublin just started picking holes in between them.”

Cullen still frequently refers to Dublin as “we”, and for good reason: he still has close ties with the current team, having played 12 senior championship seasons, starting in 2003. For many of those 12 years, Kerry were the ones stinging Dublin like a bee, until the 2011 All-Ireland final – when Dublin stung Kerry at the death, changing everything in the process.

Because now, having beaten them again in the 2013 All-Ireland semi-final, Cullen reckons Dublin see Kerry as nothing more or less than equals: “Certainly, when we were playing Kerry previously, I think they fully expected to beat us, all the time, back then. With the couple of victories we’ve got under our belt, maybe they’re not taking us for granted as they did back in that period.

“And there’s no doubt Dublin have come on hugely. When I was playing under Pillar [Paul Caffrey], we were really just looking at getting one medal. That was our focus, trying to get over the line once. Even under Pat [Gilroy] as well. It’s all anyone spoke about, was winning an All-Ireland. I started when I was 18, and I was 27 when we won the first All-Ireland. So at one stage there, for 10 years, we hadn’t won it, so it was more a relief, than anything else. But obviously under Jim things have to kick on, things have to improve every year. So to be going for three in five years is a massive achievement.”

“People have been asking me, ‘how does it compare to playing?’. It’s only now I’m realising how big an occasion these things actually are, the massive spectacles they are. As a player, I was good at keeping to myself, and just try and treat it like another game. If I was driving the car and a sports show came on the radio, I’d flick it off. Just keep away from everything, and try hone in on a performance, and not be worrying about the outcome.”

If, says Cullen, the outcome on Sunday week comes down to the last 10 minutes, then Dublin are definitely primed: “I think this will be a very different game to two years ago. Kerry are playing a different brand of football to back then, and I don’t think we’ll get the shoot out like 2013. I think tactics will play a much bigger part.

“Dublin are obviously a little more defensive to last year, and learned from that Donegal defeat. So they are keeping it tighter around the house. But Kerry are doing the same. Like ourselves, they’ve restructured.

“But Dublin have a habit of finishing games really well. They probably look as energetic in the last five minutes as they do in the first five minutes. It’s something that really stands to them. I thought they blew Mayo away physically in the last 20 minutes of the replay. Mayo just couldn’t live with them for the full 70 minutes.” To apply for the free Odeon cinemas screenings see GAA.tickets.ie