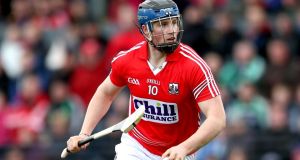 Conor Lehane scored six points on his return to the Cork senior team in their win over Kerry. Photograph: James Crombie/Inpho

Conor Lehane scored six points in his return to competitive action as Cork held off a strong Kerry challenge in the Munster Senior Hurling League at Mallow.

Lehane had been out of action since sustaining a quad muscle injury in August but, operating at midfield, he put in a good display for Kieran Kingston’s side, while his clubmate Luke O’Farrell got the first-half goal which gave the Rebels breathing space.

Kerry could never get closer than within five points of Cork, but they had a great chance of doing so when awarded a 56th-minute penalty after Cork goalkeeper Declan Dalton illegally prevented Mikey Boyle from scoring a goal. At that stage, the score stood at 1-18 to 0-16, but, after being booked, Dalton then saved well from Shane Nolan’s effort and Cork pushed on to secure their first victory in the competition.

Lehane had three points as Cork scored the game’s first five, and O’Farrell responded to Brendan O’Leary opening Kerry’s account by netting from Tim O’Mahony’s pass. Kerry upped their game after that, however, and points by Micheál O’Leary and Nolan frees had them trailing by five, 1-11 to 0-9, at half-time.

Cork couldn’t pull away in the second half, despite Alan Cadogan doing well after coming on, but neither could Kerry draw closer, with the penalty their best chance. At the death, Cadogan and Kerry’s Darren Dineen were both sent off after a scuffle broke out near the Kerry goal.