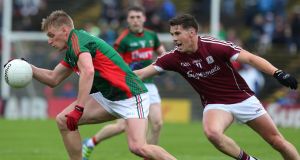 Mayo won’t be making it six Connacht football titles in a row but their shadow still falls on the final. Roscommon must have been sure they would playing the holders in Castlebar; instead, they head to Salthill. For Galway, there has to be circumspection about the value to place on their unexpected win over Mayo – certainly in terms of its diagnostic value.

It’s perhaps not surprising a side built for pace should look better in the championship than during the league but Galway have exceeded expectations in a number of areas. They held their own at centrefield, turning the two balls won on the opposition kick-out into 1-1.

Their much-doubted full- back line conceded virtually nothing from play and they also made inroads in attack.

Roscommon’s progress has been quite different. The near unfolding of a horror story in New York gave way to an emphatic put down of Leitrim; but again in the semi-final the heart was put crossways in them by having to overcome an eight-point deficit at half-time against Sligo.

The response was encouraging. Outscoring any opposition by 4-10 to 0-5 in the second half constitutes a big recovery and the quality of their forwards was clear, with Ciarán Murtagh and Enda Smith prominent.

Their problems centre on two areas. Firstly, centrefield requires constant improvisation to get by, with options for improvement either compromising mobility or the attack.

Secondly, Neil Collins is injured. He bailed out the team when introduced in the second half against Sligo and his absence weakens a full-back linethat has proved vulnerable against Galway’s Damien Comer in the past.

Roscommon have operated at a higher level this season but the reason why Galway can win goes beyond home advantage and their opponent’s inexperience. Their centrefield platform should be able to create sufficient opportunities for a varied attack that boasts the ball-playing Shane Walsh, the physical Comer and the pacy Eamon Brannigan.