Colm Begley back in Laois panel for Tyrone visit 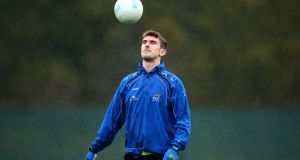 Colm Begley will be back in the Laois panel this weekend. Photograph: Inpho

Laois will be buoyed by the return of Colm Begley for this weekend’s league encounter against Tyrone - with the experienced defender having now committed his services to Mark Lillis’ team for the 2016 season.

Fresh from his exploits for DCU in reaching last weekend’s Sigerson Cup final, Begley will return to the Laois panel for Sunday’s game - although he is not expected to immediately return to the starting XV.

Begley had previously failed to commit his services to Lillis for the current campaign, while injury and his DCU commitments would delay his decision beyond the county’s opening two league games - the defeat to Galway and subsequent win over Armagh.

While he has so far not been followed back into the county fold by his DCU team mate and last year’s corner back Stephen Attride, Conor Meredith will also be back in the panel for the visit of Tyrone to Portlaoise, as will fellow former AFL player Brendan Quigley.

The 29-year-old Begley lined out in the half back line in last summer’s championship win over Carlow, as well as the disappointing defeats to Kildare and Antrim in the qualifiers. His return will be a major boost to the county’s division two promotion ambitions.