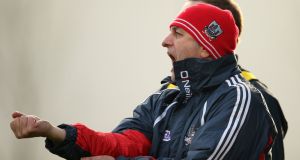 Cork enjoyed their first win of this year’s Division Two campaign with a workman like win over Fermanagh in difficult, windy conditions at Pairc Ui Rinn on Sunday.

Despite playing into that wind, they were in a winning position at the interval, leading by 1-7 to 0-4 as massed ranks of Fermanagh players set up behind the ball despite the advantage of that howling gale.

The home side led by 0-4 to 0-1 after the opening quarter following points from Paul Kerrigan (2), Niall Coakley and John O’Rourke - with Tomas Corrigan replying for the visitors.

A couple of Sean Quigley scores from placed balls cut the deficit to the minimum before Cork hit 1-3 without response. A purple patch which proved to be the winning of the game.

Coakley finished off a fine moving involving Donncha O’Connor and Kerrigan to slam in a 24th minute goal.

Cork’s expected dominance on the resumption didn’t materialise as a battling Fermanagh stayed in the game thanks to Quigley’s accuracy, reducing the margin to 1-11 to 0-9 after 58 minutes.

Cork pulled away though, registering the game’s last three points in the closing stages, and securing a first league victory of 2017.