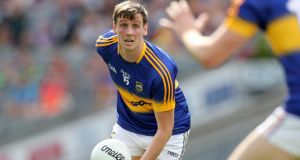 A fast start helped Tipperary claim their first league win over Laois since 1976 at O’Moore Park on Saturday night.

The visitors raced into a 0-6 to 0-1 lead after 17 minutes and the home team looked in serious trouble. Conor Sweeney had accounted for four of those opening points after Donie Kingston opened the scoring from a free inside two minutes.

Laois showed improvement in the second quarter with Kingston adding three more points and two from Colm Begley. Niall Donoher also chipped in with a classy effort. Philip Austin replied to leave the visitors in front 0-7 to 0-6 at the interval.

Tipperary suffered a blow when full forward Michael Quinlivan went off with concussion 10 minutes before the interval.

John O’Loughlin kicked the equaliser within a minute of the resumption but that was as good as it got for Peter Creedon’s charges. Philip Austin equalised almost immediately but after Conor Sweeney regained the advantage David Conway drew the sides after 40 minutes. Tipperary went two clear before Donie Kingston pointed from play only for Josh Keane and Sweeney to extend the visitors advantage to four after 50 minutes.

Laois then lost their top scorer Kingston on a black card but a minute later a great goal by David Conway cut the deficit to a single point. Tipperary regrouped, adding points by Liam Casey and substitute Kevin Fahey.

Laois were battling hard but then came the killer blow, a free 50 metres out from Kevin O’Halloran was knocked over the goal line by a defender and into the net.

David Conway responded with another point but Tipperary were deserving winners.

Roger Federer to miss French Open after knee surgery 12:45
Connacht make four changes to their pack for Edinburgh clash 12:46
Niall Scannell captains Munster side for Zebre challenge 13:56
Leinster make eight changes for trip to take on the Ospreys 13:56
Six Nations: Ireland v England all you need to know guide 13:56
Crossword Get access to over 6,000 interactive crosswords