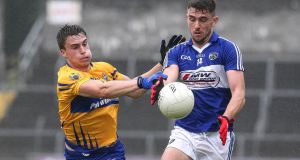 Clare’s Jamie Malone challenges Colm Begley of Laois during the All-Ireland SFC Round 2A qualifier at Cusack Park in Ennis. Photograph: Lorraine O’Sullivan/Inpho

Clare kicked the last five points to advance to the last 16 in the All-Ireland Senior Football Championship for the second time in three years at Cusack Park on Sunday afternoon.

Despite leading for the majority in incessant rain, Laois’ third game in four weeks finally appeared to catch up with them as they let slip a four-point advantage in the final quarter to suffer their first qualifier defeat to Clare in four attempts.

Backed by the conditions, Laois’ superior movement up front saw them snatch the whip hand for the opening half, albeit that they found their stubborn hosts difficult to shake off. Three times Laois would be pegged back despite holding a 0-6 to 0-3 advantage by the 21st minute, with Jamie Malone kicking three points for a resilient Clare.

However, a slick passing move involving Conor Meredith, Colm Begley and Donie Kingston unleashed wing back Stephen Attride to score the decisive opening goal in the 29th minute as Laois took a 1-7 to 0-7 advantage into the break.

Despite Clare’s best attempts, the visitors would not only maintain that cushion but extended it to four by the 51st minute after a third Kingston point.

However, Clare never panicked and after points from Gary Brennan, Eoin Cleary and Shane Hickey lowered the arrears to the minimum by the 66th minute, it was left to substitutes Seanie Malone and Shane McGrath to apply the finishing touches as Clare’s momentum dragged them over the line.