At Euro 2016 the crowd is different and the buzz too. Drink as a concept was everywhere 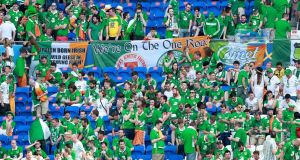 It was apparent that to abstain from drinking would quickly make spending any time with Irish fans nigh-on intolerable. Photograph: James Crombie/Inpho

The Irish fans in France – what are we to make of them at all? It seems like we’ve all wrestled with the issue, and the consensus appears to be that, much like that unfortunate conflict back in the day in Vietnam, if you weren’t there you just couldn’t understand it.

The changing of tyres for elderly couples, the impromptu panel-beating, the creepy serenading of a young French woman, the horse kicking a football into a first- floor window, was all to be filed under what the fans themselves might charitably describe as “banter”. (“Banter” – any person who uses the word is in thrall to it as a concept, and sees it as one of the most powerful forces for good in the world. And anyone who doesn’t use it, isn’t . . . and, eh, doesn’t.)

So for one day last Sunday, I signed up as a foot-soldier in the green army. I departed Dublin at 6am and returned to Dublin at midnight.

In between I was treated to a refresher course in what supporting our boys was all about – and that was drinking like it was about to be outlawed. In fact, it was apparent that to abstain would quickly make spending any time with Irish fans nigh-on intolerable.

The global reputation which we so jealously protect is built around being able to maintain that sweet spot between “nicely tipsy” and “drunken foreigner befouling our streets” just long enough for our hosts to have a few pints themselves and join the back of our conga-line. It could have been my chance to write the definitive “The Euros in France Are Decadent And Depraved” piece, but to be honest, my heart, and my liver, wasn’t in it.

I’ve attended plenty of rugby games in the RDS and the Sportsground. It would be natural for me to go to Cullen’s in Ballsbridge or O’Connell’s on Eyre Square before those games – it would almost feel strange not to.

But the idea of my driving to Castlebar last Saturday week for the Galway-Mayo game and having a pint just never crossed my mind. In fact, I was bowled over to see a Galway supporter crack open a celebratory bottle of Buckfast at the final whistle. Any survivor of college in Galway will see a sort of regional pride being expressed in his choice of drink, but the surrounds seemed a little strange, to say the least.

The crowd is different, and the buzz is different. Drink as a concept was everywhere in Lyon, even when people (men, really – it seemed to be 95 per cent men) weren’t drinking. One fellow at the game speculated to us that the 0.5 per cent beer they were selling at the ground must have been some kind of cultural misunderstanding; that surely the decimal point was in the wrong place.

I will watch both provincial finals over the next couple of weeks, and if I have a pint before the hurling in Croker, I’d be surprised. Drink won’t form a part of my conversation in the run-up to, or the aftermath of, either game.

I know that I’m not alone, and I also know that there are plenty of people, the denizens of the Hill for instance, for whom game day wouldn’t be the same without a few pints.

I once met a group of lads from Clare who pick an away game in the football league every year to go to, which included an overnight stay and a few pints the night before. Suffice to say they have yet to be the victim of price-gouging.

Maybe a year in Division Two will see them get fleeced by the hoteliers of the country . . . but I doubt it.

For the vast majority of people, a GAA game is to be enjoyed with the wife or husband and kids, and if there’s drinking to be done, it’ll be done after you’ve high-tailed it back to the home place, with the pub silent and The Sunday Game on loud enough to blow the speakers.

Games are often held in towns like Clones or Thurles that have populations far smaller than the capacity of their grounds, so obviously there’s a limit to the crowd that can walk up to the gate from their front door. And the fact that many of the big games in the championship are held on Sundays will hold many people back from over-indulging on what is effectively a work night. But drink just isn’t a factor in the way that it is when you’re supporting our national and provincial rugby and soccer teams. It seems the GAA just doesn’t need drink to have a good time . . . which might come as a relief to some of the poor stragglers with county allegiances who are still recovering from the Euros.