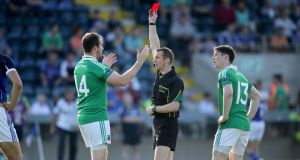 Michael Duffy shows a red card to Fermanagh’s Seán Quigley for an incident at the end of the first half during the All-Ireland football qualifier at Breffni Park. Photograph: Morgan Treacy/Inpho

A by-product of having an open backdoor draw is the possibility of teams getting over-familiar with other, and the ugly effects of that were exposed in Breffni Park on Saturday night.

After two previous championships meetings and a fiery league match inside the last 12 months, this second round All-Ireland football qualifier was a spiteful game, more memorable for the half-time fracas involving players, subs and backroom personnel than for any sporadic bursts of football.

Referee Michael Duffy showed three red cards, including a straight dismissal for Fermanagh’s Seán Quigley for the punch on Cian Mackey which ignited the brawl, and 15 yellow cards.

Erne boss Peter Canavan, who side was reduced to 13 men, questioned the high card count.

“I made it clear to our own lads that when you play against a team that you already played in the championship, there’s going to be an edge to the game and it was important to retain discipline at all times,” he said.

“At times some of the tackles were careless and players left themselves open for bookings but some of them were very questionable.”

Duffy had refereed the league game between the teams in March, brandishing four reds and 13 yellows.

Near farce
The contest descended into near farce in the second half as Duffy blew 32 frees in a stop-start, awful spectacle.

Cavan selector Anthony Forde and Fermanagh mentor Lorcan Martin were also sent to the stands for their part in the half-time melee.

Cavan manager Terry Hyland admitted there was baggage between the teams: “There is little niggles from other games, there are things sitting there and that can happen.”

Cavan made light of the theory that would struggle to beat Fermanagh again. This time, it was even more emphatic, with Martin Dunne’s 11th minute goal giving them a cushion they never relinquished.

Cavan made all the running, scoring the first three points all from play inside seven minutes.

Mackey, a threat throughout, threaded a nice pass through to Dunne for the early goal and Cavan kicked on, stretching their lead to 1-6 to 0-2 after 25 minutes.

Quigley had scored two superb long-range frees just before the chaos erupted to close the deficit to 1-7 to 0-5 at the break.

Fermanagh were already struggling with a lack of natural finishers and hit four wides in the second half before sub Daniel Kille registered their first point of the half on 50 minutes.

Cavan’s Martin Reilly was sent off for a second yellow card offence after 55 minutes. Duffy flashed his third red card to Shane McCabe in the 58th minute for a second booking.

Insisting
Canavan refused to be drawn on his future, insisting: “myself and the backroom team have really enjoyed working with this group of players”.