Another harsh lesson for Kildare from Jim Gavin’s clinical champions 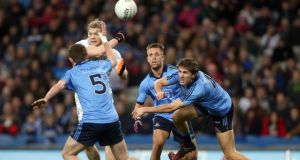 The beatings continue for Kildare at Dublin’s hand, with no particular sign of morale improving. The losing margins in their last three encounters tell the tale – 10 points, 20 points, 13 points.

Jason Ryan bristles at the suggestion that his players have a complex about playing them. But the day they prosper against the Dubs feels a long way off from here.

They had their moments in Croke Park on Saturday night, the problem being that they were moments of promise with no deliverance. They worked their way to six goal chances but only converted one, a combination of poor finishing, smart goalkeeping and the woodwork keeping them at bay.

Final total
A final total of 1-12 is not going to be enough to beat a Dublin side under Jim Gavin, not when the All-Ireland champions are creating 40 chances a game.

“Can we beat Dublin? If we played them again next week? I don’t know,” said Ryan. “But I believe that in time we will be more competitive against Dublin. That’s what you want in sport, you want to get yourself into the position where you’re competitive . . . . .

“When we had scoring chances we didn’t take them. And there was a couple of times where we missed good goal chances and Dublin came right down the field and scored. It’s that kind of a scenario that is so hard. It’s physically exhausting to have to chase back straight away and it’s mentally exhausting to know that you’ve just had a golden opportunity and all of a sudden the opposition have done you.”

It’s probably too convenient to wrap the game up in Dublin’s responses to Kildare’s misses but Ryan is right – Kildare were heavily punished for their wasteful ways. On 22 minutes, after Cathal McNally palmed the ball against the butt of Stephen Cluxton’s post at one end, Paddy Andrews had it in the net down the other in a trice.

Instead of reducing the margin to a point, Kildare went seven behind, 1-7 to 0-3. Dublin’s movement from their half-back line up is so fluid that just about every foray past midfield ends in a shot at the posts. The upshot is that for all that they can be got at in the full-back line, their scoring power leaves the opposition no margin for error at the other end.

Kevin McManamon put in a night of virtually unplayable graft, chipping in with eight points (four from play). Cian O’Sullivan and Jonny Cooper sallied forward for a couple apiece and Eoghan O’Gara was a constant irritant as well. Add in the usual two from Cluxton and the inevitable three off the bench and Kildare just couldn’t afford their misses.

Similar fate
But after hauling themselves back to within four at the break – a fine Darach Mulhall finish for a goal after Tomás O’Connor engineered space – Kildare suffered a similar fate in the second half. First McNally (crossbar) and then O’Connor (Cluxton) were denied when a goal would have closed the gap to a single point again.

Instead Dublin reeled off three points in as many minutes to put the game to bed. After losing a close one against Cork the previous week, it was back to normal service for Gavin’s side.

“It was much improved, the squad did a lot of reflection during the week on different areas that we needed to improve on. We tried some new things, some worked and some didn’t.

1 Gerry Thornley: England primed to show their best against Ireland
2 Should fans be allowed drink in the stand at sporting events?
3 Stopping Jonny May’s pace must be high in Ireland’s priorities
4 Frank Lampard says Harry Maguire should have been sent off
5 Tipping Point: Eddie Jones’s rhetoric is out of place in a febrile political climate
Real news has value SUBSCRIBE