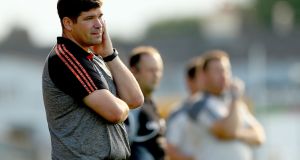 Those closest to Éamonn Fitzmaurice sensed something wasn’t right. The season now played out before him, the Kerry manager walked on to the calm grass of Fitzgerald Stadium on Saturday carrying his young daughter Faye in his arms, a sign, perhaps, of life beyond football. Even in The Kingdom.

Not long afterwards, outside a winning dressing room that had given too much only too late, Fitzmaurice played out his own restless farewell. After six years as manager, winning six Munster titles in succession, the 2014 All-Ireland and the 2017 league, it was time to move on.

Not because Fitzmaurice felt he brought his young Kerry team as far as he wanted, but that some of the negativity being aimed at them might hold them back. And for that he made no apologies.

“I think a change of voice and a change of direction will be good, and I also think by taking me out of the equation it can remove some of the over-the-top negativity that was coming at the team, which I feel was unfair.”

That negativity, Fitzmaurice claimed, included some of his players getting grief off the Kerry public outside of match days, while he had “a box full of anonymous letters” at home. Unopened, presumably.

“The players get [grief] in verbal form and written form,” he said. “Players and management and selectors too. I have a box full of anonymous letters. As a county we have probably hung our hat too much on the minor success, which has been outstanding, but winning minor All-Irelands and winning senior All-Irelands are a very different thing. And it takes time.

“You can take criticism, but over-the-top criticism? If things are going against the next man, there will be question marks, but it’ll be more muted. It gets louder the longer you stay, and I don’t like the way that was affecting the group.

“If you’re a supporter, you back the team through thick and thin, but I don’t want to go down that road of ‘poor me’ because that’s not the way it is. It doesn’t bother me at all. It comes with this position, and if you’re going to be precious on that, forget about it.”

Kerry’s fate this summer was partly in their own hands, and then let die: Saturday’s 12-point win over Kildare meaningless after what unfolded at the same time in Salthill where Monaghan beat Galway – on double scores – in the other final Super-8s game in Group 1 (sending both of those teams through to next weekend’s All-Ireland semi-finals).

In ways Kerry’s performance – highlighted again by the raw brilliance of 19-year-old David Clifford, who helped himself to 2-6 – backed up Fitzmaurice’s thoughts: there is clearly great potential there, it will take time, but maybe the patience is no longer there.

Indeed, Fitzmaurice claimed he had already made up his mind before the Super-8s had unfolded: with a second child on the way and a promotion to principal at Pobalscoil Chorca Dhuibhne in Dingle, that’s another life in itself.

“It isn’t a knee-jerk decision. I was hoping I’d be [stepping down] after we won the All-Ireland. I felt it was time. When you are preaching patience about a young group we didn’t carry that through as a county at all this summer. I think part of that was down to the fact that I was there for so long, and that, maybe, I was a lightning rod for that negativity and criticism, which, if you are 19 as David [Clifford] is or Sean [O’Shea] that is 20, the other lad Gavin White is 21, Jason Foley is 21, that is not a nice environment to try and develop yourself.

“I’m hoping by someone new coming in they’ll be given a bit of time and space, and I mean real time and real space, and real patience to allow the [younger] lads make mistakes, allow bad performances to happen, without it being the end of the world, and appreciate how hard it is to develop a team.”

After losing to Mayo in the semi-final last year, Fitzmaurice was handed a three-year term to bring him through to 2020. Now the door suddenly opens; Jack O’Connor, having served two previous senior terms as manager, is back in the cycle as a potential successor, having managed the Kerry minor team and the current under-20s, Current minor manager Peter Keane is also in the reckoning.

There will also be some air of regret given how close Fitzmaurice came to toppling Dublin in the 2013 All-Ireland semi-final, a Dublin team now accepted to be the best of the modern generation. And Fitzmaurice is still the only manager to defeat Jim Gavin in a league or championship final with that 2017 league win.

Kildare came with nothing left to play for, and made a game of it for the first half at least, before losing Neil Flynn to a red card. They lost another player at the end, defender Mick O’Grady, but by then the fate of the game was already decided.

Still, Kildare were up four points at the break, 1-12 to 1-8. With the extra man and extra motivation, Kerry duly took Kildare apart in the second half. Too much, too late.