Dublin can give U21 championship an unexpected finale 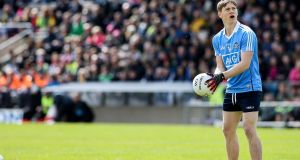 Con O’Callaghan: will pose a big threat to Galway’s defence as Dublin bid for U-21 All-Ireland crown at Tullamore. Photograph: Philip Magowan/Presseye/Inpho

The last under-21 football final brings together an apt pairing as both Dublin and Galway have dominated the last 15 years of the championship: between them, eight titles and five of the last seven.

Dublin have had much the greater success with the level as a development grade, adding four senior All-Irelands in that time as against none for the Connacht side.

It’s striking to remember that when the counties previously contested a final, as recently as 2002 Dublin had yet to win an under-21 All-Ireland and didn’t manage to do so until a year later.

This has been a memorable championship. Kerry, having won the last three minor All-Irelands, were unbackable in the semi-final but a blitzkrieg start by Galway – 1-7 to 0-1 in the opening 10 minutes – put the favourites on the back foot from the start.

Although it was clear Kerry didn’t perform in that vital opening period, Galway brilliantly exploited that and the wind advantage. As admirably, they weathered the Kerry comeback in the second half and ran out winners after seeing their lead shrink to three points going into the final quarter.

Tactically Kerry stayed too far off their men and Galway hacked up in the available space, Michael Daly doing particular damage as a roving centre forward and wing backs Killian Molloy and Ciarán McDaid swarming forward.

All this free-form attack was controlled by and based on a great centrefield platform of Peter Cooke and Cein D’Arcy. So far, so impressive.

Dublin however came a different route but were impressive in doing so. They equally took advantage of underperforming opponents – in Donegal’s case because they had to play three matches in 10 days – and overcame adversity in losing top forward Con O’Callaghan to a black card within five minutes.

Dublin’s organisation and methodical structure reined in Donegal from the start and the team retained enough liveliness and focus to take its scores and watch the lead grow. It poses a threat to Galway because the Leinster champions are unlikely to allow anything like the free-range conditions on offer against the Kingdom in Ennis.

The cockpit of this may well be centrefield because if Dublin can contain Cooke and D’Arcy they will be well on the way to springing a surprise. Encouragingly Brian Howard was man of the match for Dessie Farrell’s team in the semi-final.

On the face of it Galway are deserved favourites but the inkling here is that if they can be frustrated – as happened against a good Sligo team in the Connacht final – Dublin have the firepower up front with O’Callaghan, Colm Basquel and Aaron Byrne to exert pressure on the scoreboard and cause an upset.

Meath v Laois, Páirc Tailteann Navan, 3.0 – With both teams winning their opening match, this is virtually a qualification eliminator. Laois huffed and puffed a bit initially to stay with Westmeath and then to hang on against their comeback but they were clear winners. Meath have had a remarkable run in the past year, consistently winning when not expected to, including last week against Kerry. Their hard work and determination won the day despite having spent the league two divisions behind their opponents. There hasn’t been much between the visitors and Kerry, which will encourage Meath, but Laois are in reasonable form and can avoid a surprise here. Verdict: Laois

Westmeath v Kerry, TEG Cusack Park Mullingar, 3.0 – Westmeath again gave a good account of themselves in the opening match against Laois but came up short despite scoring two late goals, which made it all less comfortable for the winners. Here they have home advantage against a Kerry side that were a division higher this season but which got relegated, lost a leading player, Daniel Collins, to injury and, according to manager Fintan O’Connor, performed well below par in the opening defeat by Meath. Westmeath played well in patches against Laois but have the experience of these matches and home advantage. Verdict: Westmeath

Chiefs survive loss of Mahomes as Brady wins battle of the veterans 12:04
Bríd Stack released from hospital with no spinal damage 11:46
The Offload: Ronan O’Gara more than willing to take a punt on Jack Crowley 10:00
Spirited finish allows Kevin Na to win Sony Open 09:09
All in the Game: Glowing tributes few and far between as Özil’s Arsenal exit nears 09:00