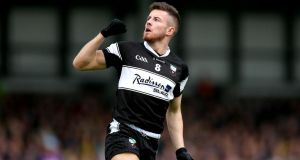 Sligo’s Cian Breheny has been in good form since his move to midfield. Photograph: James Crombie/Inpho

Sligo’s young midfield duo may well have been the catalysts for a mid-season turnaround but their shortcomings under the kickout cannot be ignored.

This year Niall Carew’s team had failed to win a game in Division Three before opting to experiment with two natural forwards in their eight and nine jerseys. They had lost four from seven competitive games before the second week in March, their two wins coming in the FBD League against GMIT and Leitrim.

Seven players had been tried at midfield, and for the visit of Louth Carew opted to partner 20-year-old Cian Breheny with fellow DCU student Niall Murphy. They won 2-26 to 2-9.

In their opening six games Sligo had averaged 0-13 but with their new midfield partnership intact this has risen to 1-17 in the five since, which has included games against Roscommon, Armagh and Tipperary.

Breheny and Murphy have scored 0-10 between them since moving into the middle but more than that it’s been their distribution, movement and industry that has set off the scoring exploits of Adrian Marren, David Kelly and Pat Hughes.

However, with neither player stretching to 6ft, Sligo are in danger of being completely swamped on the opposition kickout against Mayo, even more so than they were in the Roscommon win .

Despite losing Roscommon won 83 per cent of their 23 kickouts in that Connacht semi-final, only hitting three of those short. After the first kickout of the second half, they began to take full advantage of their aerial superiority, hitting the remaining 10 kickouts down the centre. They won eight of those, before Stephen Gilmartin replaced the injured Breheny and fielded twice over Roscommon substitute Michael Finneran. 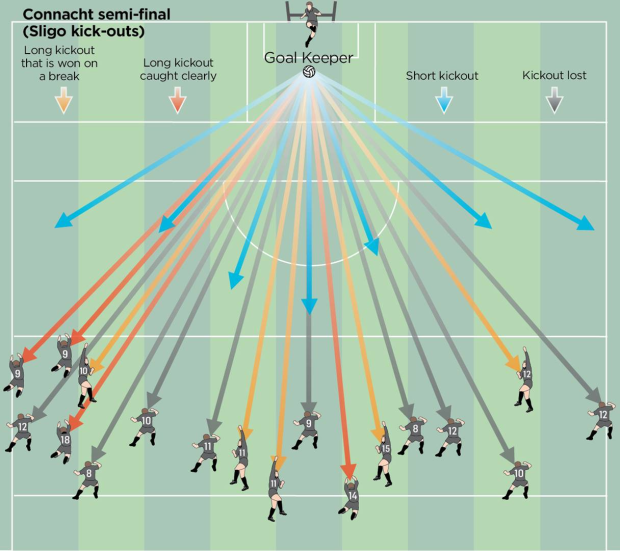 Before that, Sligo had won just one direct Roscommon kickout in an hour, via a break. On Sligo’s own restarts, their midfielders only competed for seven of 25, winning only three. Each of those coming from neatly placed kicks from Aidan Devaney towards the sideline.

Sligo relied on short kickouts, hitting seven within their own 45. When opting to go long they tried to draw in their midfielders and hit their half-forward line in the midfield area.

This tactic largely resulted in breaking balls, of which Sligo won only 25 per cent (3 of 12). Their only clean overhead catches came from Stephen Gilmartin, again towards the sideline, and from Pat Hughes late on.

Roscommon created 16 attacks from their 23 kickouts.

So will Sligo start Gilmartin against Mayo, pushing either Murphy or Breheny into the half-forward line? Or perhaps bring out Pat Hughes as a third midfielder, as they’ve done in the past.

Mayo won 12 of their 17 kickouts against Galway’s much-vaunted midfield, and 14 of those were direct.

The flipside to any such notion is the influence Murphy and Breheny have on proceedings when given the freedom of a midfield role, although Mayo will prove far more aggressive and mobile opponents than Roscommon in that sector.

Breheny kicked two points from three attempts against Roscommon, made two successful take-ons from three runs, and won two turnovers. While his intensity set the tempo, it was Murphy’s kickpassing that set Marren and co on their way.

Murphy kicked 13 passes, all but one finding a man; he also made two turnovers, had one shot at the posts and won three of four kickouts directed at him(all in the right half back slot).

In all he was directly involved in the play on 37 occasions, yet there was a nine-minute period late in the game when he had no touches. Suggesting the full 70 minutes in that role may be a bit of an ask.

Either way Sligo will need to decide how important the aerial contest is to them against Mayo – it’s unlikely the Roscommon win will have changed Carew’s approach though.