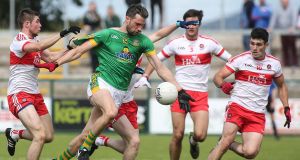 Last Saturday Meath surrendered a seven point half-time lead to be beaten by three points. It wasn’t the first time this had happened in 2016 and their fans were and still are incensed.

A county justly proud of their never-say-die history – but now their team are what? The biggest bottlers in the country?

Too harsh, perhaps, but Meath are the team in this year’s championship least capable of holding on to a half-time lead. And that is a fact.

So far in 2016, league and championship (football) there have been 163 games played. In only 34 of those games has a winning half-time lead been surrendered, with that team either losing or drawing the game.

That equates to 20 per cent of the overall games. One in five. Meath have lost interval leads in four of their 10 games.

Without bringing last year’s misdemeanours into the equation – in 2016 Meath have been overturned by Derry (in last weekend’s qualifier), they led rivals Cavan by seven points in the league and ultimately lost by the same number.

A week later they were nine points up against Galway yet had to settle for a draw. Then in a crucial league tie with Derry in round six, they led by a point but couldn’t hold on. 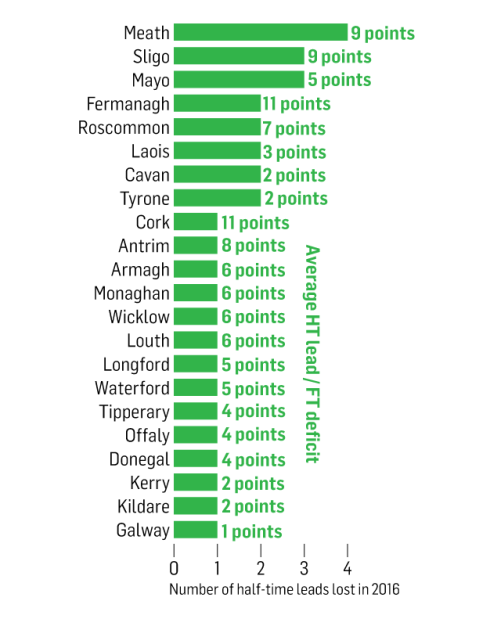 Of the 33 teams who compete in the national football league and All-Ireland senior football championship, 22 have let a lead slip after the change-of ends, at one time or another. Fourteen of those teams have done so on just one occasion though. After Meath – Sligo and Mayo have both done so on three occasions.

Fermanagh are one of five teams to have done so twice. Their average points turnaround is the highest of any county – 11 points.

The biggest individual turnaround though was at Sligo’s expense – eight points up against Roscommon in the Connacht semi-final they would be beaten by nine. A 17-point turnaround.

Second to that result comes Meath’s collapse against Cavan. The county that came out on top in the four-in-a-row saga against Dublin in the ’90s, who reeled Mayo back in, in the 1996 All-Ireland decider – they would surrender a seven-point interval lead to their local, and promotion-seeking rivals.

And the league is often a precursor to what is to follow in the summer months. After struggling past Louth and being outclassed by Dublin in Leinster, Meath did it again against Derry – that game in Owenbeg proving to be the ninth championship game in a row in which they’ve been outscored in the second half.

As for the most recent benefactors of this pattern – Derry – the Ulster men have actually trailed at half-time in all of their 10 games so far in 2016.

They have come back to win four, and to draw two of those games.

Of course winds have to be taking into account, a number of half-time leads may be solely down to, or largely down to a strong wind blowing directly into one goalmouth. Meath did have the wind in the first half against Derry.

Nonetheless over the 70 minutes of an inter-county game both teams, more often than not, do have the same amount of time with this advantage and if anything the 80 per cent win ratio of teams who lead at half-time (whether they had a wind advantage or not) is indicative of a team opting to play with the wind in the first half and build a platform.

Meath will have a new management, and a nice early summer lay-off to deal with their whys and what-ifs. As will 10 of the other teams who make the list (45 per cent, 10 of those 22 teams are now out of the championship.)

For those who still remain though, they’ll know that pacing themselves is not advised.