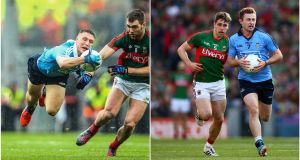 Dublin’s John Small has impressed this year, but the absence of Jack McCaffrey is still felt. Photographs: Both Cathal Noonan/Inpho

For 54 minutes of the All-Ireland final draw two weeks’ ago, the reigning champions were minus half of last summer’s winning backline. That’s minus two of last summer’s All Stars. No Rory O’Carroll, James McCarthy dismissed on a black card and no Footballer of the Year, Jack McCaffrey.

His direct replacement however would leave the pitch that Sunday afternoon with the man of the match award. John Small.

“Even though John Small is a very, very fine footballer – I think Dublin are missing the pace of Jack McCaffrey down along that left channel. He gave them an attacking outlet last year that really isn’t present today.”

RTÉ’s Ger Canning there, summing up the views of many during that draw – Small is good alright, but imagine if McCaffrey was there. In the Clontarf man’s absence it’s natural to compare, the grass is always greener - but these two are not like-for-like number sevens.

Small adds an awful lot to Dublin’s game in terms of breaking tackles, winning contests. The ultimate team player. Yet without McCaffrey they lack a unique talent who can turn static play into scoring opportunity with one change of gear.

During last year’s championship McCaffrey was awarded the man of the match award (Sky Sports) after Mayo and Dublin’s semi-final draw. In that game he was on the ball on 21 occasions. Small was in possession during this year’s draw on 31 occasions. Both players scored a point during the respective draws, and both made three turnovers.

Although the Ballymun Kickham’s defender’s turnovers were more of the lionhearted sort, McCaffrey’s were an exhibition of timing – right place at the right time – and of course, speed.

And in that are the key attributes that distinguish these two excellent young half backs. Far from like-for-like alternatives but both incredibly effective in their own right.

Small is a constant, always available to help out his team-mates in possession.

Always where he should be as an outlet on the left flank, under the breaking ball. Consistent and no-nonsense in his use of possession. He catches the eye with his body-before-thought approach to winning breaking balls and lost causes. His leg power to break tackles, his ball winning ability. He’s no slouch either.

Small would contest three aerial contests in the drawn game, making one spectacular catch. He would lose possession just the once – being very unfortunate not to win himself a free in doing so. And have a direct assist for a score. 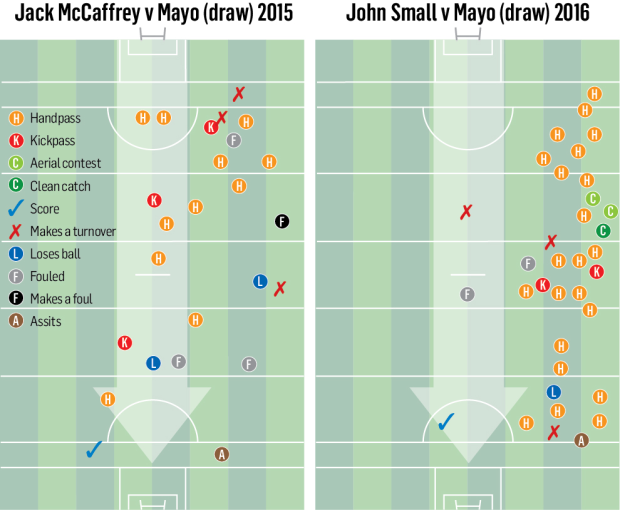 On the other hand McCaffrey provides the turbo boost that was so crucial to Dublin’s triumphs in 2013 and 2015.

He may not be built for war like Small, but his raw pace gives Dublin an extra attacking dimension.

Described by Tadhg Kennelly as “lightning fast, explosive and great to watch as he loves taking on the opposition” - McCaffrey would provide go-forward ball on 20 of the 21 occasions he was in possession during last year’s semi-final draw.

What other player could ghost through the Mayo defence as he did to provide the assist for Kevin McManamon’s crucial goal?

In the drawn final Small was one of the culprits of the lateral passing that - stemming from Dublin’s engine in the half back zone - allowed for such predictable transitions. But he is not there to create something from nothing.

Others were given that responsibility and 0-6 from play suggests they failed.

In a war of attrition such as the drawn final, Small’s attributes however allowed him to stand out. But minus McCaffrey Dublin were without a player who might not be as involved, but can change the pace of an attack in an instant. A proven match-winner, from wing back.

“Jack McCaffrey ran a 2.8 for a 20-metre sprint. The record at that level is 2.78. It blows them out of the water in Australia and straight away it’s a thing that clubs can look at and say ‘there is freaky talent in Ireland. They’re not just footballers, they’re athletes as well,” Kennelly said three years ago when trying to recruit the UCD medical student to the AFL.

Dublin scored 18 goals in the 2015 championship, McCaffrey was involved to some extent for nine of those.

This year they have managed only seven, with Small involved in two, a pretty innocuous pass on the sideline to Paul Mannion, whose individual brilliance then opened the Donegal defence. While he also won the free that provided the assist for Dublin’s second goal on the last day out. So far from the creative force in either.

Both the same age, same position. Yet such different players. Keep an eye out for either on on their bikes cruising through the city. Small, head down and focused. McCaffrey a free spirit.

The types of young, talented, incredibly athletic and utterly dedicated Dublin players that are the blueprint for the county’s current domination of Gaelic football. Domination that will be reflected in the history books if this crop can capture a fourth All-Ireland this weekend and finally capture back-to-back titles.

Standing in their way, their most familiar opponents.

This Saturday will prove an 11th meeting with Mayo since 2011. Only Kerry have played the Dubs as many times in that period.

After Tyrone (one point deficit) Mayo have the lowest average losing margin (two points deficit) of any of the 17 counties who have played Dublin during those six seasons.

Kerry’s average losing margin is three points, the same as Cork – who actually have a 40 per cent win rate over Dublin. The best rate of any team in that period.

While Tyrone have had the best success in preventing a Dublin win, doing so on 60 per cent of their seven meetings. Followed by Mayo (45 per cent) with three draws, and two wins.

To prevent that percentage from becoming 50:50 Dublin will require another dynamic, inspirational showing from Small. It should not be on his shoulders however to also match McCaffrey’s creative input. A square peg won’t go in a round hole.

Leave that unenviable task to the returning McCarthy, and if he’s redeployed once more, Ciaran Kilkenny.

And Small will continue doing the things that he does best.