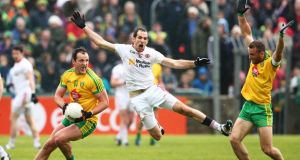 Gone are the days that Donegal start cautiously before opening up in the second half, so far in this year’s championship they’re at their most lethal in the opening ten minutes.

In last year’s championship they scored 2-37 in the first-half of their six games, eclipsed by a second half total of 6-43.

Of course they’ve only played two championship games so far this year, against Tyrone and Armagh respectively, although this is a trend which has been prevalent from as far back as the McKenna Cup.

Donegal scored 67 per cent of their total in those three games during the first half, albeit the pre-and post interval contrast was not quite as stark during the league campaign.

Throughout Jim McGuinness’ time in charge of the county though Donegal had more often than not been inflicting the majority of their damage in the second period. In 2012 Donegal trailed Tyrone at half-time in the Ulster semi-final, and in all 54 per cent of their scores came after half-time during that famous campaign. 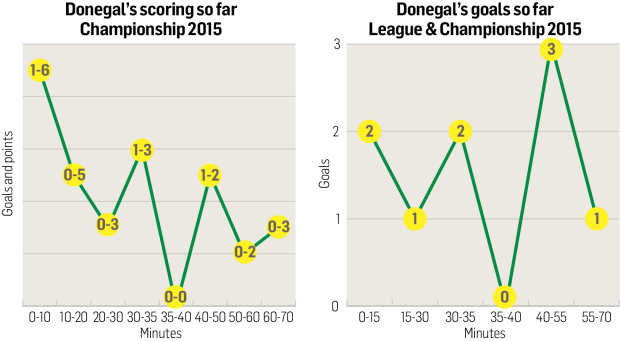 Despite their tailing off during the second 35 minutes of games so far this year , one of Donegal’s most dangerous periods is in fact between the 40th and 50th minutes.

Not only did they score a combined 1-2 during that period against Tyrone and Armagh, but when you add in their scoring aggregates for the 2015 league they have scored three goals between the 40th and 55th minute.

This period, along with the opening ten minutes of course, and the five minute period before the end of the first half, have proven to be Donegal’s most fruitful.

So far in the championship they have 1-3 in that crucial five minute period. Of the nine goals they’ve scored in 10 league and championship games in 2015, they scored two within five minutes of the break.

Donegal have by all accounts been very impressive in their two games, they have scored 3-24, converting 61 per cent of their chances.

Michael Murphy has been thriving in a far deeper role, he may not have scored from play so far, but against Armagh for instance he touched the ball an incredible 51 times.

Donegal, renowned for their sharp counter-attacks, spent over 21 minutes of that contest in possession. When you consider that the game is generally in play for less than 35 minutes of a gaelic football match it’s quite clear how Donegal had total control of proceedings.

Given that Armagh entirely wiped them out in the kickout stakes, their total domination is all the more impressive. While clean catching was at a premium, Armagh won nine of the first ten kickouts, and four of the first five in the second half. Between the Armagh and Tyrone games Donegal have won just 38 per cent of the kickouts. And again that’s without the midfielders being beaten in their individual duals, but rather the execution of Tyrone’s short kickout ploy and Armagh’s strength under the breaking ball.

The statistics equate to a team who while maintaining much of the same principles of the McGuinness era, have added some string to their bow in 2015. Derry will need to prepared for an early onslaught this weekend.