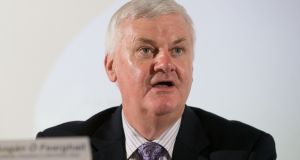 GAA president Aogán Ó Fearghail has said that the disruption to counties caused by the Bruce Springsteen concert in May has to be counter-balanced by the benefits to be gained.

The double bill of Leinster quarter-finals between Dublin and Wexford in hurling and Kildare and Wexford in football, scheduled for 29th May, have been brought forward by eight days to Saturday 21st.

“I don’t think there will be any knock-on effect,” said the president. “They still have the same space to continue the club fixtures.

“They simply shift a programme of games from a Sunday to a Saturday. It does involve a change, there’s no doubt about that . . . but it also is a balance because a concert here is a significant benefit to clubs and we saw that in our finances during the week.

“If we have a substantial concert here, which this has the potential to be, that has an incredible benefit for the clubs everywhere throughout the association because it’s very clear what happens to any revenue that comes in through a concert. It goes back to special projects in counties and clubs.

“In a packed programme where you have province, county and club there will be some of that but overall we’ve had these discussions and are happy that the fixtures are taking place here.”

The president was speaking at Thursday’s launch of the GAA’s Lá na gClubanna, the national club day which features community activities throughout the country. It takes place on May 8th.

Meanwhile, Cork footballers have made five changes to the side that beat Mayo last weekend.

Eoin Cadogan who was replaced after the incident in which Mayo’s Lee Keegan sustained concussion is as expected omitted.