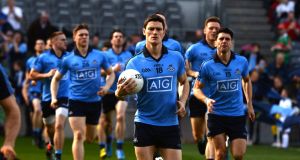 “[Diarmuid Connolly] has all the talent but he’s matched that in with his physicality, his work rate and with his leadership of the team,” says St Vincents teammate Paddy Andrews. Photograph: Dara Mac Donaill

TODAY Dublin SHC final Cuala v St Judes Parnell Park, 3.0 It’s hard to imagine two Dublin clubs more eager and ambitious heading into this hurling showdown. They both have class and quality in equal abundance too, and whichever club does emerge as new Dublin champions will unquestionably have deserved the honour.

Cuala have won this title three times before: in 1989, 1991, and 1994. Three years ago, they took out the five-in-a-row champions Ballyboden St Endas, then the likes of Craobh Chiaráin and Crumlin, only to narrowly fall to Kilmacud Crokes in the final. Now, having beaten Ballyboden St Endas in the semi-final, racking up 27 points, they’re back in the final. Managed by former Galway selector Mattie Kenny, they boast forwards Mark Schutte, Colm Cronin and David Treacy, although central defender Paul Schutte has been ruled out with a shoulder injury.

For St Judes, it’s all about getting over the line: the Templeogue club is still searching for that elusive first title. They were four points down at half-time in their semi-final against Lucan Sarsfields, before winning by five. What’s ultimately driving them is last year’s narrow final defeat to Kilmacud, after extra time. They’re a well-balanced team and feature former Waterford club standout Wayne Hutchinson, but Cuala should have the extra class up front to win it. SUNDAY Dublin SFC final St Vincents v Ballyboden St Endas, Parnell Park, 4.0 Paddy Andrews doesn’t throw compliments around without good reason, and here is what he said about Diarmuid Connolly.

“I’m actually trying to think of something that hasn’t been said about him already. For me, he’s definitely one of the best players I have played with. It’s just a privilege to see some of the things he does. You kind of laugh at yourself, nearly, on the pitch. He has all the talent but he’s matched that in with his physicality, his work rate and with his leadership of the team.”

Connolly is not the only reason St Vincents are going for a third successive Dublin title, but his performance may well decide whether or not they win it. Indeed in their semi-final win over Na Fianna, it was as if Connolly was playing within himself, chipping in five points while keeping plenty in reserve. With Tomás Quinn and Ruairí Trainor to bounce some moves off, there is no shortage of scoring potential in the team.

For Ballyboden St Endas, seeking only a third ever title, and first since 2009, defensive strategy will therefore be crucial. Michael Darragh Macauley will need to provide the proverbial all hands on deck, but it’s difficult to see how they can match that firepower of St Vincents. It may be closer than some people expect and yet St Vincents with Connolly on board will prevail. Munster SFC quarter-final Clonmel Commercials (Tipperary) v Newcastle West (Limerick) Clonmel Sportsfield, 2.0 After bridging a 23-year gap to win the Limerick title, for only the third time ever, this might feel like bonus territory for Newcastle West.

However, they certainly won’t be arriving in Clonmel without the hope of progressing further into the Munster championship.

Indeed managed for Donegal native Anton McFadden, they easily accounted for pre-match favourites Drom/Broadford in the county final, with Jamie Lee and veteran Stephen Kelly doing the main damage up front in a 2-10 tally.

Still, Clonmel Commercials will present a more thorough challenge, winning back the Tipperary title after just a three-year gap, and with the likes of county star Michael Quinlivan in their ranks, they should have marginally more experience to prevail. Leinster SHC quarter-finals: St Mullins (Carlow) v Clonkill (Westmeath) Netwatch Cullen Park, 2.0 So, after Mount Leinster Rangers provided one of the fairytale stories of the 2013 club championship, can St Mullins now do the same? They’ve just beaten the more fancied Mount Leinster in their county final by a deserving seven points, and confidence is soaring.

They meet a team who have also taken out reigning county champions, after Clonkill dethroned Raharney in the Westmeath final. It wasn’t exactly a vintage final, with Clonkill very nearly letting their nerves get the better of them in the tense moments towards the finish. It will be close, but if confidence plays any part then St Mullins certainly have that. Clough-Ballacolla (Laois) v Oulart-the-Ballagh (Wexford) O’Moore Park, Portlaoise, 2.0 (Live, TG4) After winning a sixth title in seven years this would appear to be business as usual for Wexford champions Oulart-the-Ballagh. They racked up 2-15 against St Martin’s in the county final, Rory Jacob and Keith Rossiter as deft as ever, while Garrett Sinnott and Nicky Kirwan hit 2-7 between them. It’s over a month now since Stephen “Picky” Maher bagged 0-11 as Clough/Ballacolla came from behind to take their eighth Laois title, defeating Camross, but they will need something special from “Picky” to take out Oulart-the-Ballagh. Ulster SFC quarter-finals Crossmaglen Rangers (Armagh) v Erins Own, Cargin (Antrim) Athletic Grounds, 2.30 Of all the club championship matches this weekend only this one would appear such a foregone conclusion, because after winning a 19th Armagh title in 20 years, Crossmaglen Rangers once again appear unstoppable. The 2-22 they scored in the county final over Armagh Harps was as impressive as it looks, Rico Kelly, David McKenna, Kyle Carragher, Tony Kernan and Michael McNamee scoring at will. On that note, much of this game could be damage limitation for Antrim champions Erins Own, Cargin. Kingscourt (Cavan) v Kilcoo (Down), Kingspan Breffni Park, 2.30 It may or may not be a good sign of the quality of Down football that Kilcoo won another county final without any great challenge, their fourth title in five years. Goals from Ryan and Jerome Johnston and Paul Grennan made sure Castlewellan didn’t have much of a say in the final.

Now comes a more testing prospect: Kingscourt Stars, who claimed their 11th Cavan title earlier this month. But with full forward Joe Dillon still suspended from the red card he received in last month’s semi-final against Killygarry, they’re likely to struggle against the momentum of Kilcoo. Naomh Conaill (Donegal) v Trillick St Macartans (Tyrone) MacCumhaill Park, 2.30 Not many expected Trillick St Macartans to be representing Tyrone in the Ulster championship, including perhaps themselves. After years in the wilderness they’d just returned to the senior championship, only to end up beating a fancied Killclogher in the final, teenager Lee Brennan scoring the winning point. Now comes the challenge of Donegal champions Naomh Conaill, with home advantage, and fresh from an impressive county final win over St Eunan’s, thanks in no small part to Donegal star Leo McLoone. It probably won’t be pretty but Naomh Conaill can win it Scotstown (Monaghan) v Slaughtneil (Derry) Clones, 2.30 (Deferred coverage on TG4) Tyrone native Mattie McGleenan spoke earlier this week about the evolution of Scotstown, the Monaghan club he now manages. After winning the county title in 2013, their first in 19 years, they went into the Ulster championship with limited ambitions. They were narrowly beaten by then Derry champions Balllinderry. Now they face Derry opposition again, in the form of reigning Ulster champions Slaughtneil, and Scotstown can’t afford t be lacking in any ambition this time. They’ll have the experience as well, but perhaps not yet the depth to take out Slaughtneil.

1 Tour de France: Every yellow jersey winner must feel guilty by some association
2 Ken Early: Handball ‘crisis’ a timely distraction from the grim bigger picture
3 49 and out for Corofin as their long Galway reign is ended
4 Arctic conditions in Ballymena and snowflakes in Paris
5 More fireworks on club scene as Corofin’s long Galway run ends
Real news has value SUBSCRIBE