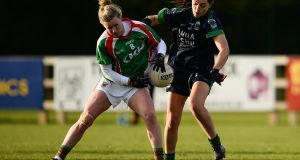 Foxrock hardly leaps into the mind as a traditional GAA stronghold yet, over the past decade, the local ladies Gaelic football team has made a slow, inexorable climb from infancy to the pinnacle of the club game in Ireland.

There isn’t all that much surprise at the fact Donaghmoyne, the towering force from Monaghan, have returned to defend their All-Ireland title in tomorrow’s senior club final.

But the emergence of Foxrock-Cabinteely, barely a decade after their amalgamation, is the latest evidence of the rude health of Gaelic football across the capital city.

It is also one of the most vitally independent GAA clubs across the country in that it was established as a women’s GAA club rather than emerging as an adjunct of an existent club.

“We knew we had to seek out something different,” says Pat Ring, one of the founding members of the club.

In 2005, when a group of local men sat down to discuss the state of GAA affairs, they saw that both parishes sat in the long shadows cast by Kilmacud and Cuala.

“Both are giants. We recognised that we couldn’t compete at all grades so we decided to stick with ladies football because the game was fairly strong in both Cabinteely and Foxrock. Philip McAnenly realised then that we needed to work with partner schools. And the rest is history because we specialised.”

When Sinéad Goldrick attended primary school in St Brigid’s, she was the only girl in her class playing football. This week, Ring visited the school to remind the pupils about Sunday’s final – and the club has 95 members in St Brigid’s alone.

Eleven years on after the official founding of the club, Goldrick has become established as one of the most complete and versatile players in ladies football and has been an All-Star for the past five years.

She returned to club training on the Wednesday after Dublin had lost the All-Ireland final to Cork by a single point. It was their third consecutive defeat to Cork and for days afterwards, opinions raged about a clear Dublin point which was waved wide.

Goldrick can admit now that she was in a bit of a daze throughout the week afterwards.

“I just remember telling myself to snap out of it,” she says.

“I don’t think anyone said anything. They just gave me a hug. I was just heartbroken. You know, you obviously want a different result and when you are in any kind of final, you are completely focused on it. And once that is gone, it is a very empty place in that dressing room. So the club game coming up was a blessing.”

As a kid, she palled around with Pat Ring’s daughter Amy: both now play for Dublin.

Angie McNally, whose Dublin career made her aware that it was possible for a girl to aspire to play for the county, coaches the senior team now.

The progression of the club has been lightning fast. Still, it’s different in the city: the archetypal GAA club adventure features the entire community wreathed in club colours. That isn’t the case in Foxrock-Cabinteely.

“They put a sign up on the N11 and outside our clubhouse,” says Goldrick.

“But we don’t have a bar. We have a pitch and a changing room so like the club doesn’t have all the flags and wouldn’t be as visible as it might be in rural clubs. What we have is a huge sense of community.

“Ena Brophy is one of the mums on our team and she would give sweets out to kids coming to matches after games and even before games outside Dublin she would have everyone over to her house beforehand. A lot of us grew up playing together. So our club, what we have, I think is really special.”

In the All-Ireland semi-final, Foxrock-Cabinteely overcame Carnacon, the Mayo champions, in what was a lurching, electrifying game.

Carnacon had Cora Staunton, the Mayo woman who sort of forced the male-dominated GAA world to acknowledge the potential of the women’s game through a decade of inimitable brilliance and ridiculous scoring feats.

She still scored 1-7 but the Dublin team went supernova after the side was reduced to 14 players in the closing stages.

Goldrick, playing a deep midfield role, scored an equalising point and rather than fade, they conjured up two goals to win by 4-9 to 2-11. It’s obvious from listening to Goldrick that her respect for Staunton is total and it’s also clear that she sees all the current generation of ladies footballers as pioneers for the next generation.

Goldrick is 26 but has been playing for the senior club team for a decade and as Dublin vice-captain, she has become one of the players that the current students in her locality can look up to. She features in some of the branding campaigns that orbit Dublin senior GAA teams.

The Dublin women’s team wear the same jersey as their male counterparts but the comparable similarities in their week-to-week experiences begin to thin out after that.

Dublin women’s players do not get expenses; they do their own fundraising. It costs them to play for the county.

Goldrick’s training schedule doesn’t differ from any of the elite players in the male game. She is just as serious, just as ambitious. When work colleagues make plans to go out for drinks on a Friday evening, she heads home to prepare for weekend training.

“Sometimes that can be tough. You are working full-time, training a lot and trying to eat healthy – and do washing in between. Sometimes, when you might have a Dublin game somewhere down the country, you might be wrecked and you have to remind yourself then why you are doing it. Then, I might be having a stressful day at work but the thing is that you come back from a training session happy.

“I know if they day comes that I don’t have that passion for the sport then I won’t be playing it. But it’s something that I’m really proud to do. And the WGPA [Women’s Gaelic Players Association] forming this year have made progress.

“This is the first year we get a grant that will be given to the players. There are a lot of inequalities across the board in sport and yeah, there is a big difference between what men and women get out of it. Just like the men, we are there to try and win an All-Ireland. And maybe not the whole world knows how important it is but the people around you do and your friends do.”

For Pat Ring, the national recognition Foxrock-Cabinteely now command vindicates the decision taken a decade ago. The club is now coaching boys’ underage teams and will nurture male teams now that the women’s club has been established as a successful entity.

Like anyone involved in the women’s game, he feels that the sport should come under the umbrella of the GAA before it can realise its potential.

“It is economy of scale and we are very much pushing the ladies agenda but until such time as the whole thing comes under one umbrella, there is no chance.”

Sinéad Goldrick is optimistic and confident that in 20 years time, the ladies game will have an exalted profile.

“I do think that teams then will be playing in front of far greater crowds and yeah, I’ll probably wish that could have happened in our time.”

For now, the progress is measured.

The Dublin-Cork All-Ireland final drew rave notices but gaining exposure for the sport on a seasonal basis is a priority.

“Well, playing in Parnell Park, we will hopefully have a crowded stadium,” says Goldrick.

“But yeah, playing in Croke Park is a tremendous privilege. And a lot of club players will never get to do that. We are in a senior All-Ireland final. So does that warrant playing in Croke Park? For us, it would have been great. And if it was before the men’s club All-Ireland: then yeah, of course, you would love that. Any player would love that.”

She has hardly had time to draw breath since that galling September loss and now finds herself back in an All-Ireland final.

Foxrock-Cabinteely will be outsiders and are playing a formidable club who have claimed four titles and lost two finals in the decade since the Dublin side have been reaching this stage.

“For us to reach the final is excellent but we have a special group. I know we have a lot to offer. And being involved with Dublin, I know it will be 60 minutes of us putting everything into it for one another. We’ve had tough games. I know we will bring that extra 10 per cent.”