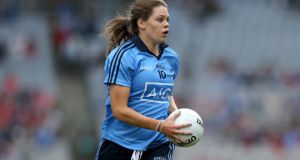 Noelle Healy was one of the goalscorers for Dublin along with Nicole Owens (2), Hannah Noonan and Kim Flood in their 5-14 to 2-7 win over Cork. Photograph: Inpho

Last year’s beaten finalists Dublin hammered Cork to make it through to the semi-finals of the Tesco Women’s National Football League on Sunday.

Gregory McGonigle’s charges defeated the holders by 5-14 to 2-7 at CIT to book their spot in the last four, in what was a repeat of last year’s league and All-Ireland deciders.

With Monaghan losing to Kerry in the final round of group fixtures, Dublin leapfrogged the Ulster outfit to keep their league hopes alive.

Dublin will now play Galway in the semi-finals, with Munster rivals Cork and Kerry renewing acquaintances in the other game.

Nicole Owens netted twice for Dublin against Cork, with Noelle Healy, Hannah Noonan and Kim Flood the other goalscorers.

Valerie Mulcahy and Doireann O’Sullivan scored consolation goals in the second half for Cork, who were 0-2 to 3-9 behind at half-time.

Elsewhere, Kerry’s 0-16 to 1-11 victory over Monaghan in Castleisland ensured the Kingdom’s place in the semi-finals.

Cathriona McConnell scored 1-5 but it wasn’t enough as Peter Clarke’s Monaghan found themselves squeezed out of the top four.

Kerry led by 0-8 to 0-5 at half-time, with Louise Galvin, Patrice Dennehy, Louise Ní Mhuircheartaigh and Sarah Houlihan all prominent.

Kerry pushed on to lead by 0-12 to 0-6 with 20 minutes left before Monaghan were handed a lifeline when Aisling Leonard pulled down Ciara McAnespie to concede a penalty.

The Kerry defender was yellow-carded and McConnell netted the rebound, after Edel Murphy saved her penalty.

That left just a point between the sides, 1-10 to 0-14, but late scores from Ní Mhuircheartaigh were crucial as Kerry held on.

Tyrone had 10 different scorers on the day and collected all but one point of their winning tally from play.

Visitors Laois arrived half an hour late for the game but Noirin Kirwan scored three early points as they began brightly.

But that was as good as it got in the first half for Laois as Tyrone took over to lead by 3-9 to 0-3 at half-time, with the goals scored by Gráinne Rafferty, Cathy Donnelly and Niamh O’Neill.

Tyrone added further goals from Joline Donnelly and Gemma Begley in the second half, with Charlotte Delaney raising a consolation green flag for Laois, who will play in Division 2 next year.

In the big Connacht derby in Ballina, Galway beat Mayo by 1-16 to 2-6. Cora Staunton scored all but one point of Mayo’s total as Tracey Leonard collected 1-5 for Galway.

In Division 2, a playoff will be required to decide who tops the table after Donegal and Cavan finished level at the top.

Armagh secured third place as they whipped already relegated Down by 10-24 to 0-0 and Westmeath also finished in the top four despite losing to Donegal.

In Division 3, Waterford will face Roscommon and Leitrim are due to take on Sligo in the semi-finals.

1 In turmoil on and off the pitch: Where did it all go wrong for Barcelona?
2 College football turns blind eye to Covid-19 by risking players' health
3 Rugby impasse continues as no deal reached in fourth round of IRFU salary talks
4 Limerick’s Shane Dowling forced to retire at 27
5 The Best Of Times: Harrington stares down Garcia in epic Claret Jug battle at Carnoustie
Real news has value SUBSCRIBE