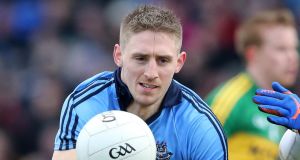 The Dublin footballers must come to terms with another cruciate injury setback, as news emerged last night that forward Eoghan O’Gara will miss the rest of the season.

He is the third of Jim Gavin’s football panel in little over 12 months to sustain this injury after corner back Kevin O’Brien and forward Ciarán Kilkenny both missed the 2014 championship after injuring their knees in February and Match of last year.

A statement on the county board website confirmed that the player had done the damage on Sunday, playing with his club Templeogue Synge Street. The injury was diagnosed as an ACL rupture.

Dublin manager Jim Gavin said: “On a personal level this is extremely disappointing for Eoghan. His start to the 2015 season had been very positive with some excellent performances in the O’Byrne Cup and National Football League. ”

He added that O’Gara, 29 this year, would “receive the best of medical care and the Dublin football medical and coaching staff will actively assist in his recovery over the weeks and months ahead. We wish Eoghan a speedy recovery, and we look forward to seeing him back to full health in the near future.”

O’Gara has been a prominent member of Dublin teams for the past five years and his traditional target-man role in the full-forward line has given the team tactical variety.

He played in both the All-Ireland final victories of 2011 and 2013 although in the latter, having helped to turn the match against Mayo when he came on in the first half, he damaged a hamstring in the second half but had to remain on the field, as the team had used all of its replacements.

The most obvious is the presence of the past two All-Ireland champions in the Division One A relegation play-off. In the four years of the format, no county with that recent an All-Ireland has been involved in the match to determine who stays up in the top division.

It has been a difficult campaign for both Clare and Kilkenny but the current All-Ireland champions and holders of the league for the past three years have the alibi of a number of retirements in the close season and most relevantly the absence of the Ballyhale players during the club championship - all of whom (pending the Henry Shefflin retirement decision) are expected to be available for the play-off in Nowlan Park next Sunday.

Since beating Laois in last year’s league quarter-final, Clare failed to win a match in a run of seven league and championship fixtures until defeating Dublin two weeks ago for what was the team’s only win in the division.

It’s all of five years since Kilkenny last failed to reach the league final and they haven’t been relegated for more than 20 years.