Damien Comer can be Galway’s man of the hour 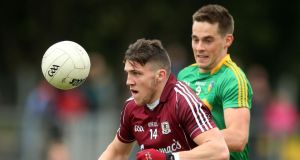 Galway forward Danny Cummins believes Damien Comer is going to be their trump card against Armagh in the qualifier at the Athletic Grounds on Sunday. Full forward Comer won an under-21 All-Ireland with Galway in 2013 and has kicked 2-6 so far in this year’s senior championship.

Cummins believes there is still much more to come from the Annaghdown clubman.

“He was always a good underage player but since he came in on the under-21 team a couple of years ago the rate of development has blown up,” says Cummins. “He’s turned into a monster of man, he’s a great addition to have in there. It’s bigger and better he’s getting. It’s great to have him to play off.

“His worth on the field is easy to see: he is very skilful, but is well able to win his own ball too, which is huge at senior level.”

Mayo continued their drive for five Connacht championships in a row when they beat Kevin Walsh’s men 1-15 to 2-8 last month. Cummins bagged 1-1, he started at corner forward and was marshalled Keith Higgins in Pearse Stadium, a face-off the 25-year-old says he always relishes.

“I’m well used to marking Keith so that was never going to bother me. When you are marking one of the best defenders around it’s a real motivation.

“People said it was a decent performance from me, but the fact of the matter was he beat me to a few balls. And there was a block-down in the first-half that lead to a point at the other end.”

Galway beat Armagh 1-11 to 0-9 in the qualifiers at Salthill in 2013, but Cummins got a goal that day but he knows away from home Kieran McGeeney’s side will be a much stiffer assignment.

“We played them in Pearse Stadium two years ago in the championship but it’s always daunting to go up there.

“We’re well used to playing in the north, but the Athletic Grounds is always tough – the crowd always seem to announce their presence.

“And the day that’s in it, it’ll probably be 90 percent home support. We know the job that faces us, but if we win it could launch a big season for us.”