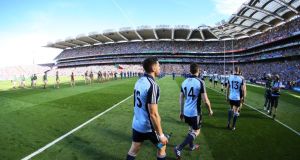 It was only when stadium director Peter McKenna said it that you began to think. Commenting on Croke Park’s having cleared its debt and asked when was the last time that had happened, he didn’t know.

“I’m not sure if it ever was. I think it always had debt associated with it, even prior to 1993. Maybe not, it’s a very hard comparison. The building is so much different than it was 15 to 20 years ago.”

The past 20 years speak for themselves with the GAA and its biggest project having to pick their way through a debt of nearly €180 million from a total outlay of €285 million undertaken before any Government support became available.

Even before then there have been projects in Croke Park going back through every decade apart from the 1970s. Liam Mulvihill recalled in an interview 10 years ago how apprehensive the association had been in undertaking the Ceannárus project in the early 1980s, which provided the GAA with new administrative headquarters for the Centenary Year in 1984 at the cost of over a million pounds.

Financial engine
The original idea that Croke Park would become a financial engine for the GAA has now been realised in earnest and with concerts and American football events due later this year that revenue potential is very topical.

It’s also been particularly timely given that the centenary of the stadium was marked just before last Christmas, less than two months ago. Debt was an early way of life for the new venue, which had been bought by one of the GAA’s unsung heroes, journalist and association administrator Frank Dineen, with his own money and held for half a dozen years or so effectively in trust until the GAA could afford to buy it from him.

Neither is there anything new in sweating the asset: as far back as 1925, a rodeo was held in Croke Park and raised £1,228.

There were concerns expressed (in a private report) by a marketing sub-committee nearly a full decade ago that in the early stages of its shiny novelty and the widespread plaudits that came its way the new stadium might end up developing a life of its own.

It could become in public perception a distinct entity, a symbol of modernity leaving the GAA as a kind of bad bank, retaining the controversies and resentment at central edicts on the part of those administered at grass-roots level.

Its status within the GAA however can at times be ambiguous.

It’s obviously the most recognisable symbol of Gaelic games but as shorthand for grievance – as in “that shower in Croke Park” – it takes on a different meaning.

Instrumental
There is also another issue with the ground in the eyes of some. Jeremiah (“Small Jer”) O’Leary was a father of the GAA in Kerry and through his life served as an administrator who was instrumental in the development of Fitzgerald Stadium in Killarney as well as a selector of 14 All-Ireland winning teams between minor and senior.

He was involved in the purchase of Croke Park just over 100 years ago and it therefore was a surprise when talking to his daughter Margaret in 2002 to find her slightly dismissive of the then new stadium, which she regarded as a GAA venue for the East of Ireland only.

Whereas the county never quibble about having to visit Croke Park to play Dublin or anyone else, the complaint that it is a Dublin stadium has inevitably gained currency in many other quarters since the Dubs started winning again and, more pointedly, using the ground for its league matches.

Will Leinster Council sacrifice the revenue to move the champions out of the biggest venue? It hasn’t happened in a while – eight years.

Again, this isn’t a new phenomenon. Back in the 1920s Tipperary proposed that Dublin be asked to play All-Ireland matches somewhere other than Croke Park.

For some hurlers the ground is second in their affections to Thurles. One, who’d won an All-Ireland, said it wouldn’t bother him if he never played there again.

Quiet triumphs
That may still be a minority view – particularly next weekend when the junior and intermediate All-Ireland club finals take place at the venue in what has become one of the quiet triumphs of the GAA year.

But at the beginning of its second century we can forgive Croke Park the complexity of its history and the various feelings it arouses in both the association and the world at large.

1 Mesut Özil confirms Arsenal exit as he moves to Fenerbahce

Alisson denies Man United as Liverpool go four without a win 18:49
Mesut Özil confirms Arsenal exit as he moves to Fenerbahce 17:37
Here is your handy guide to sport on television this week 17:01
Dreal Deal steps up again at Punchestown despite alarming drift in price 16:37
Tanguy Ndombele’s moment of magic caps Spurs win at Sheffield United 16:33