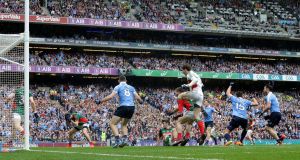 A few American newspapers and websites fell upon a similar wheeze last weekend when they took to straight-out listing the lies Donald Trump had told on the campaign trail over the previous week. As ever in election season, it doesn’t do to be too naive about these things so it was probably more than pure coincidence that these pieces appeared en masse the weekend before the first Presidential debate. But then again, there’s a dangerous nincompoop trying to get hold of the nuclear codes so maybe we can forgive a little friendly groupthink on this occasion.

It made for devastatingly effective reading, all the same. The New York Times listed 31 outright lies over the previous six days. Politico came up with 87 in five days, at a rate of “one every three minutes 15 seconds over nearly five hours of speeches”. The Washington Post, with delicious phrasing, declared him “a candidate who at times seems uniquely undeterred by facts”.

So here we are, three days out from an October All-Ireland final replay. It feels like the season started sometime in 2011. Both these teams have been microscopically analysed from every feasible angle. And many unfeasible ones. There’s nothing left to say and three days left to say it.

When you get to this point, it’s very easy to get stuck in the weeds. Possessions, plays, distances covered, all that jazz. You can, without really knowing it, miss the simple stuff.

Goals are still killing Mayo. Still. If Cillian O’Connor’s equaliser hadn’t gone over the last day, it would have meant that for a fifth year in a row, the final game of Mayo’s summer featured them conceding two goals. The only other teams who’ve gone out of the championship conceding twice for four years in a row are Carlow and Longford. Mayo are the emphysemic old goat still smoking on the sly, long after the diagnosis has come in. It’s almost an affront to science that they’re still here.

And so, in an effort to cut through the miasma of tactical jiggery-pokery ahead of the replay, we present, in the manner of Trump’s lies, the goals that have cost them so dearly so often.

* All-Ireland final 2016: (Leading 0-2 to 0-0) A simple one-two puts Brian Fenton in on goal, his shot is saved by David Clarke, Bernard Brogan’s toe-poke deflects in off Kevin McLoughlin.

* All-Ireland final 2016: (Level 0-3 to 1-0) Colm Boyle loses Dean Rock from a Diarmuiid Connolly free kick, drops the ball onto Boyle’s instep for a second own goal.

* All-Ireland semi-final replay 2015: (Level 1-12 to 1-12) From the next kick-out, Jack McCaffrey zips into Mayo territory. Ciaran Kilkenny puts Bernard Brogan away, one-on-one along the endline. Brogan’s flick leaves Philly McMahon with an empty net to bundle it home.

* All-Ireland semi-final replay 2015: (Behind 1-13 to 2-14) With Mayo committed forward, Kevin McManamon is left in space at the Canal End. The finish is excellent but he’s under no pressure.

* All-Ireland semi-final replay 2014: (Leading 2-3 to 0-3) James O’Donoghue runs at Keith Higgins, his shot is half blocked and bounces up for Kieran Donaghy to tap home from two yards out.

* All-Ireland semi-final replay 2014: (Leading 2-6 to 1-6) Kieran Donaghy catches a high ball and dishes off to O’Donoghue who is fouled. O’Donoghue slots the penalty.

* All-Ireland semi-final replay 2014: (Leading 3-9 to 2-11) James O’Donoghue is fouled as he shoots by Ger Cafferkey and scores the penalty.

* All-Ireland final 2013: (Leading 0-4 to 0-1) Bernard Brogan gets his hand to a high ball to flick to the net even though he is outnumbered by Ger Cafferkey and Rob Hennelly.

* All-Ireland final 2013: (Level 1-9 to 1-9) Michael Darragh Macauley feeds Denis Bastick down the middle  of the Mayo defence. Bernard Brogan pulls off to the back post for an easy tap-in.

* All-Ireland final 2012: (Level 0-0 to 0-0) Karl Lacey floats a high ball into Michael Murphy, one-on-one with Kevin Keane on the edge of the square. Murphy fends Keane off to finish high into the net.

* All-Ireland final 2012: (Behind 1-1 to 0-0) Patrick McBrearty’s shot for a point comes down off the post, Kevin Keane fails to collect, Colm McFadden picks up the pieces to score.

Twelve goals in five matches. Ten of them when Mayo were either leading or level. Two of them own goals. Two of them penalties. Two of them the opposition’s first score of the game. Two of them directly from Mayo’s own kick-out. Only one that left them still with a lead after it went in.

So we can look at this replay upside-down and inside-out. We can posit that Dublin won’t be as bad again. We can surmise that there will be changes of personnel and position. We can do all of this and more.

But if anyone thinks Mayo can survive on Saturday conceding multiple goals at stupid times, then history will show that Donald Trump is maybe not so unique in being undeterred by facts.