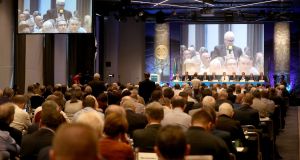 The Club Players Association’s motion to ensure transparency in how delegates follow their mandate was rejected by 83 per cent of Congress delegates.

I never have too hard a time staying positive about the GAA. But 12 days later, I’m still struggling to figure out what exactly we learnt at the 2018 Congress.

Of course, it’s impossible to say you’re necessarily surprised that the Club Players Association’s motion to ensure transparency in how delegates follow their mandate, or deviate from their mandate, was so heavily defeated, to the tune of a 83 per cent – 17 per cent. Turkeys don’t vote for Christmas, if you don’t mind my wielding the analogy axe a little close to the bone.

The problem with this motion was not so much the content of it, as the people behind it. If this idea had come from Central Council, the vote would have passed with the minimum of fuss – as a mere procedural footnote to the weekend.

It would have passed because the idea that you mandate your delegate to vote, but then have no recourse to find out whether he or she followed that mandate, is bizarre, and that’s an argument Central Council would have found very easy to make. With the advent of electronic voting, this information is now both easier to conceal and easier to disseminate than ever before.

In the past, a simple glance at your county’s table to spot when your delegate’s arm was raised was all you needed to know how he or she voted. Now they can vote in absolute secrecy on an electronic device you can hold in one hand.

One point raised by Frank Murphy in the course of a Cork County board meeting before Congress was the following: “This motion is an insult to Congress and not alone that, it’s totally impractical; you have 400 delegates voting on 40 motions, are we saying Congress should be delayed while votes are recorded and furthermore, that the minutes reflect every vote?”

It’s unfortunate that no one at the Cork County Board meeting took the time to explain to Frank Murphy that the technology now exists for 400 votes to be electronically cast, and from where those votes came duly recorded, relatively speedily. In fact, I would go so far as to say that this onerous task could be achieved by a computer in about one second . . . with an estimated margin of error of one second.

There also exist corners of the internet where said information could be stored and displayed so that they can be viewed by the people the delegates are representing, without hampering the order of business of Congress. We wouldn’t even have to check beforehand with the internet powers-that-be, because I really don’t think such an online nook would take up that much space.

Of course, to quote Frank fully, he finished that part of his speech with this doozy: “We know where this motion is coming from and we shouldn’t support it.”

Which brings us back around to the idea that it’s never just the message, oftentimes it’s the messenger.

I’m sure there were good people at Congress who saw merit in the motion. I’m sure there were people there who are both anxious to vote as mandated, and strong enough to stand up at a county board meeting and say why they made an informed decision, having heard the merits and problems of a motion debated at Congress, to vote against the mandate.

Because the job of a delegate is to be an honest representative of a county board. If a delegate feels that a decision was reached by a county board without all the information having been presented to them, then they are perfectly free to change their vote. But they have to have the character to be ready to explain it.

But if the delegates of the 2018 GAA Congress asked themselves honestly how they thought a plebiscite of every member of the GAA would vote on last week’s motion 22, how do they think it would go? The 83-17 percentage result would be reversed, at a minimum.

To be that wilfully out of touch – that’s not representation. We charge them to be the voices of everyone in the GAA. If a motion asking every delegate to stand over every one of his or her votes is that scary a proposition, then we need to examine what exactly we think Congress is achieving.