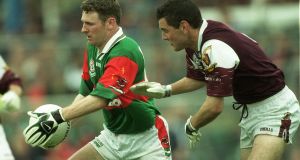 Mayo’s David Nestor and Tomas Meehan of Galway in the Connacht Football Championship final in Tuam in 1999. Photograph:

I met Stephen Rochford last week in the McWilliam Park Hotel in Claremorris, Co Mayo. It’s a typical small-town hotel, with some relics of auld decency floating around for a cup of tea or looking to get a not-too-long-after-midday dinner.

When I asked at reception for a quiet corner to conduct a podcast interview with the Mayo football manager, the staff couldn’t have been more helpful. And the lady at reception knew the score – “there’s a big few days coming up for that man”.

Rochford moved to Saint Jarlath’s College in Tuam as a boarder for the school year of 1996/97. It was, therefore, the shortest of walks for him to see Mayo knock Galway out of the 1997 championship before he had even seen one Leaving Cert paper. He was behind the goal in Tuam, he told us, when his club-mate PJ Loftus scored a brilliant goal which proved the difference on a beautiful late May afternoon.

From 1954 to 1997, Mayo had tasted nothing but defeat in the north Galway town once described by the old GAA writer Raymond Smith as a town that hums with football, in the same way as Thurles is in thrall to hurling.

In 1997, Mayo were hardened by their All-Ireland final defeat the year before, and won decisively. But while many people are drawing comparisons this week to the 1998 game in MacHale Park which launched Galway’s All-Ireland bid that year, it’s the game the following year that appears to me to be more instructive.

In the run-up to the game in 1998 there was hope in Galway circles that a young team might be going places, but no real solid basis for expectation. By the time they met in that game in Tuam in 1999, Galway were All-Ireland champions.

In what was by my reckoning the last time before this weekend that Galway and Mayo met as bona fide All-Ireland championship contenders, Mayo won 1-14 to 1-10 in the only game in recent memory that comes close to the build-up this game has gotten in recent weeks.

It was a capacity crowd of over 30,000 in a ground stretched to breaking point. In many ways that afternoon was to be the catalyst for the redevelopment of Pearse Stadium – Tuam hasn’t hosted another Galway/Mayo championship game since. Mayo were hurt by Galway’s success in 1998 – they wouldn’t have been human if they weren’t. It was a true heavyweight bout, with a nasty edge to boot.

By the time they met in 2002, Mayo had fallen quite a distance from the late 1990s. It might have taken Mayo beating Galway in the Connacht final of 2004 for them to realise they had a chance to go places under John Maughan that year.

After that Galway’s star was on the decline, and so it has been a long wait for these teams to meet on a similar level, with All-Ireland titles suddenly a realistic aim for both.

Just how realistic an aim it is for Galway is perhaps still an open question, and one which Mayo people may not be quite on board with just yet (Colin Sheridan writes in the Mayo News this week that belief is soaring in Galway after they “won the National Football League, becoming the first team in history to do it by actually losing the final to Dublin by four points”).

Galway’s Damien Comer seems to believe it judging by his bullish comments last month when accepting his player of the month award for April.

Rochford referenced those comments more than once with us, and in subsequent interviews.

In Comer’s defence, he said “an” All-Ireland, so it’s clear he didn’t necessarily mean the 2018 edition, but this is the sort of nuance that the Mayo players and management could be forgiven for overlooking.

Galway have won the last two games against Mayo, but by season’s end in 2016 and 2017 it was clear that Mayo were still the greater national force. Galway’s league campaign, and the defeat of Mayo in Pearse Stadium in a game that descended into a running battle for the last 10 minutes or so, has shaken confidence in that assertion somewhat.

Are Galway moving closer to the top, or was that defeat symptomatic of a Mayo team in decline?

Sunday might tell a tale. Rochford doesn’t seem like the sort of fella who would be too comfortable being chaired off the field, as John Maughan was in Tuam that wet day in 1999. Yet nevertheless he realises the importance of Sunday.

He’s too long going up and down the N17 now to know any different.

1 Gerry Thornley: After 32 weeks the Six Nations is back up for grabs
2 Arsène Wenger: Arsenal was a matter of life and death to me
3 Extremes of sweet and sour for Solskjaer as Man United show signs of revival
4 Stockdale and Ringrose on board with expansive Irish game plan
5 Bennett girding his loins for impossibly unpredictable Vuelta
Real news has value SUBSCRIBE