Cavan board likely to accept fine and suspensions arising from fracas

‘We don’t condone it and we regret that it happened,’ says Cavan PRO Declan Woods 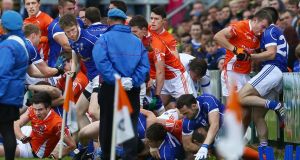 Cavan and Armagh players become involved in a brawl before the parade at the Ulster quarter-final at the Athletic Grounds. Photo: William Cherry/Presseye

In contrast to Armagh, the Cavan County Board have indicated they may accept the €5,000 fine and match bans proposed by the GAA, arising from the mass brawl before last Sunday’s Ulster championship quarter-final.

Armagh already confirmed they will contest their €5,000 fine and the one-game suspensions for Brendan Donaghy, Kieran Toner and Andy Mallon.

Cavan’s executive will meet today to discuss the sanctions, which include single match bans for Martin Dunne and Fergal Flanagan, but they seem keen to face the consequences of their actions.

“Let’s be very clear: we didn’t think there is a place for this in our game or that it was right,” said Cavan PRO Declan Woods last night.

“We don’t condone it and we regret that it happened.”

The GAA’s disciplinary body – the central competitions control committee – recommended the minimum one-game ban so unless future hearings prove successful the five footballers will sit out their next championship outings on June 28th.

Armagh – having beaten Cavan 1-12 to 0-9 at the Athletic Grounds – will play Tyrone or Monaghan in the Ulster semi-final while Cavan face Westmeath in the qualifiers.

“The Armagh County Board were this afternoon informed of the decision by the CCCC after the investigation into the incident before the Ulster championship first round win over Cavan at the Athletic Grounds in Armagh,” read a statement on Armagh’s website.

“The county board will be appealing against the decision.”

That means all three players can state their individual cases before the central hearings committee. The CHC also have the right to increase the suspensions. Video evidence will be used.

It remains unclear whether the county boards will seek to overturn the fines.

Dunne, who kicked 0-8 in last year’s victory over Armagh, injured his hand in the melee, and was unable to feature in the game, but video evidence appears to reveal him as an aggressor. Donaghy received treatment for a cut above his eye.

Referee Marty Duffy decided to take no disciplinary action after the fight which erupted after Armagh stood behind the Cavan flag in the pre-match parade.

There was also an incident at half-time between Armagh assistant manager Kieran McGeeney and Cavan’s Eugene Keating but no disciplinary action has followed.

After the game Cavan manager Terry Hyland said: “[The Dunne injury] would appear to have happened at the start of the parade, in that incident. His hands and his arm are injured. I hadn’t time to talk to him, with the game about to start, but it happened at that juncture. I didn’t really see what happened as I was around 80 yards away from it.

“Why it started, I dunno. It was an issue over flags and Armagh stood behind the Cavan flag. It shouldn’t really have happened and I couldn’t do anything to get involved in it.”

Meanwhile, the GAA’s central council have passed the new ruling, with regard to 20- metre free pucks or penalties in hurling, and confirmed it will come into effect from tomorrow. That means the sliotar can no longer be lifted over the 20 metre line as has been made popular by Cork goalkeeper Anthony Nash. Instead the run up must begin seven metres before the line