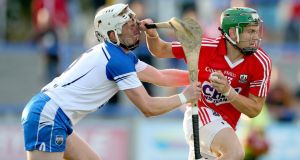 One of the stars of the 2014 hurling summer has the chance to become a double Munster medallist this evening. Cork’s Alan Cadogan will lead the charge for the Rebels at Cusack Park as they aim to dethrone Bord Gáis Energy Munster and All-Ireland under-21 champions Clare.

Cadogan has emerged as a huge find for the Cork seniors in their march to provincial glory and he’s hoping to sign off as an under-21 hurler by claiming more silverware in Ennis.

The 21-year-old Douglas player hit 1-4 in Cork’s Bord Gáis Energy Munster under-21 semi-final victory over Waterford and now has Clare firmly in his sights.

And while Cork will face Tipperary in a mouthwatering senior All-Ireland semi-final at Croke Park on August 17, for now, it’s all about the under-21 grade for Cadogan.

He said: “My main focus at the moment is Clare, Tipp isn’t until three weeks down the track. We’re going up to Ennis, playing the All-Ireland champions, we’ll be under no illusions how big a task it’ll be.

“It’s difficult but as a fella said to me the other day, ‘you’re probably playing more games than you’re going training’. That’s a good thing because you have momentum when you’re playing games, but you need time to recover as well.

“You just look through the talent they have and the fact they were beaten at senior and a bit upset about that, this is their All-Ireland really.”

Cadogan turned up the heat on Clare by insisting that the Banner boys are carrying all of the pressure into this evening’s tie.

Clare, managed by Gerry O’Connor and Donal Moloney, are bidding for a third successive provincial title, while Cork haven’t won this competition since 2007. And impish corner forward Cadogan said: “We can go up to Ennis and play with a freedom because the pressure is on Clare, they’re in front of their own crowd and they’ve all the big names.

“They’re reigning Munster and All-Ireland champions which makes it a challenge for us, but it’s one we accept readily, we’re looking forward to it.”

And while Cork’s underage record in recent times is poor, Cadogan insists that they’re “not a million miles away.”

He acknowledged: “If you’re to be honest about it the hurling in Cork underage, minor and under-21, we haven’t won any silverware. This year we’ve that Munster title at senior, but we’re narrowly missing out underage. You saw the minors a couple of weeks back against Limerick, losing by only a couple of points in the end, so we’re not a million miles away.”

And for Cadogan, this evening presents him with the chance to finally erase the bitter memories of last year’s Bord Gáis Energy Munster under-21 semi-final defeat against Tipperary.

A fancied Cork team travelled to Semple Stadium but lost by 15 points – and Cadogan was whipped off in the 38th minute. “What a difference a year makes. Last year I was on the fringes of the senior but realistically I wasn’t going to make the panel against Dublin or Clare. Then to go out against Tipp at under-21 was a huge shock, and I’ll hold my hand up and say I played pretty badly myself.”

But Cadogan worked hard during the winter months and has taken his big chance with both hands. “I had the Fitzgibbon (UCC) and the under-21 football and club championship thrown in as well. A couple of hurling games came my way, I played well and took my chance, but for now all the focus is on under-21.

“I had only played about three league games and we’ve strength in depth in the (senior) panel, the likes of Aidan Walsh joining, Paudie (O’Sullivan) and Luke O’Farrell coming back from injury, if shows why you have to take the opportunity when it comes.”