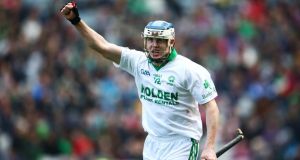 TJ Reid is one of four Ballyhale Shamrocks players to return to the Kilkenny side for Sunday’s Division 1A releagtion play-off with Clare. Photograph: Cathal Noonan/Inpho

Kilkenny have wheeled out the big guns for Sunday’s Division One A relegation play-off against Clare. As expected manager Brian Cody has given instant recalls to the Ballyhale Shamrocks players who have missed the league to date because of their successful campaign in the All-Ireland club championship.

There are all told seven changes, as Kilkenny introduce four Shamrocks players, Joey Holden at corner back, Michael Fennelly at centre back, TJ Reid on the 40 and Colin Fennelly on the edge of the square. The team is further strengthened by the return of All Star Cillian Buckley, current Hurler of the Year Richie Hogan and last year’s captain Lester Ryan.

Having beaten Clare with a much weakened team in the last divisional match of the league, Kilkenny are hot favourites to maintain their top-division status.