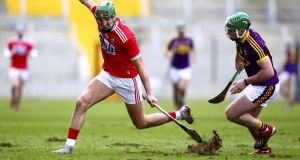 Cork’s Aidan Walsh is caught in the pitch while avoiding Wexford’s Darren Byrne during the Allianz Hurling League Division 1A game at Páirc Uí Chaoimh on Sunday. Photograph: Ken Sutton/Inpho

Some scale back, some delay, a charity conflict, a significant cost overrun and now a pitch surface deemed “unacceptable” and an injury risk to players. Clearly not what Páirc Uí Chaoimh had in mind for its grandly planned redevelopment.

This latest setback – certain to add to the estimated €100 million cost, including some €15 million of an overrun – will require a complete pitch replacement later this year, using more durable methods similar to the pitch surface at Croke Park.

In the meantime the Cork county board has postponed the fixing of any further league fixtures at Páirc Uí Chaoimh until the pitch surface is at an acceptable standard and “no longer presents an injury risk to players”.

In a statement released through Croke Park, who are now overseeing the running of the stadium, the Cork county board admitted “the playing surface at Páirc Uí Chaoimh for last weekend’s Allianz Leagues games was unacceptable”.

There was a double-bill of games on Sunday, Cork footballers losing to Kildare, before the Cork hurlers lost to Wexford, the pitch surface already badly torn up in advance of that second game, prompting widespread criticism.

Part of the problem, according to the Cork county board, stems from the development work itself, suggesting “the heavy pitch-side traffic, associated with the construction works for the new stadium build, has had a detrimental effect on the pitch”.

The problem clearly runs deeper, the advice being a complete pitch replacement will be required later this year: “As was evident yesterday [Sunday], in winter conditions, the surface is likely to cut up badly. However, as weather improves the grass roots will develop and playability will improve dramatically,” said the Cork county board.

“The stadium team have engaged the Sports Turf Research Institute, who are international pitch specialists, to advise on the best way forward. Their preliminary results suggest a pitch replacement, later this year, will be required. In the short term, we will continue to use best endeavours to ensure the surface is kept to an acceptable standard.

“Our primary concern is player safety, and if an acceptable standard cannot be achieved we will not risk player injury by fixing games in the stadium.”

In the meantime, Cork’s next home game in hurling, against Clare on Saturday week, February 16th will now be played at Páirc Uí Rinn.

“Thereafter, we will assess the pitch each Monday, in advance of the upcoming Allianz League games, and advise Central Competitions Control Committee (CCCC) accordingly.”

The redevelopment, bringing the stadium to a 45,000 capacity, was slightly delayed, due to a combination of technological issues and the failure to finalise security protocols, with building contractors Sisk originally agreeing to turn the stadium over to the Cork county board for the 2017 Munster football final on July 2nd. Instead that was delayed until the hurling quarter-finals, played on July 22nd.

Over the term of the build, parts of the original plan were also scaled back; a mooted centre of excellence became a 4G all-weather pitch in front of the main entrance to the South Stand, while the roof had to be constructed in Europe.

This problem with the pitch, however, wasn’t expected, even if a more modern surface wasn’t applied. Instead, the original pitch and soil was simply cut up and put in storage, re-laid to the same size in October of 2016, while much of the redevelopment work was still ongoing.

The final bill was expected to come in just a shade below €80 million, above the original target of €70 million, €30 million of which came from the Government. Then in December, Croke Park stadium director Peter McKenna said the cost of redeveloping had escalated to €110 million, almost €25 million higher than the €86 million total estimated following the completion of works last year. McKenna also suggested that solving Cork’s GAA financial issues is a “10 to 15-year set-up”. GAA president John Horan last month suggested the final figure was more likely between the €86 million and €110 million.

Ryan addressed the cost of the stadium during his annual report last week, ahead of Congress later this month: “I suppose the 110 [million] number is the worst, worst case. From a financial perspective in terms of my own way of thinking about things . . . you start at the most conservative estimate and in all likelihood things will be better than that.

“Eighty-six [million] is what they call the construction cost to date. Without getting too technical about it, there are some other costs relating to the construction that will be categorised as different things in the accounts . . . I actually don’t know where it’s going to be in that range. It will only be when those three or four processes are complete that we’ll know finally where it ends up.”

Only now there is the additional cost of relaying the pitch, adding at least another million euro, depending on what exact process is used.