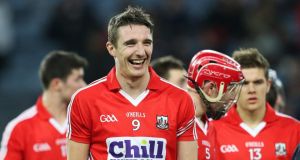 If Cork can limit their influence, through Aidan Walsh (above), Séamus Harnedy and Mark Ellis in the central area Waterford’s challenge won’t run as smoothly. Photograph: Inpho

Allianz Hurling League final
Cork v Waterford, Semple Stadium, 3.30pm – It has been a notable aspect of Waterford’s feisty displays that they reach tomorrow’s Allianz Hurling League final with their defensive system intact. Trialled in a lower division to ensure competitiveness, it played a role in their promotion and more significantly in the defeat of higher-ranked teams, Galway and Tipperary. Had they been taken to the cleaners Waterford might have been burdened with doubts going into the championship.

Equally, neither of the Division One A teams played particularly well against them – surprisingly in Tipp’s case as they had been exposed to the supplemented defence in a couple of challenge matches before last month’s league semi-final and couldn’t claim to have been surprised.

But there’s been more to Waterford than simply a defensive system. Austin Gleeson and Tadhg de Búrca have been performing exceptionally in the half-back line and Pauric Mahony in attack has been relentlessly punishing frees.

Cork are still casting around for starting players. Aidan Ryan’s introduction from the blue as a full back illustrates both how badly Jimmy Barry-Murphy is missing the injured Chris Joyce and how all of the other candidates are better in a different position.

The question is out there: how will Waterford cope if opponents get a serious scoring run on them? Preliminary indicators in the semi-final were positive in that they unflinchingly absorbed Tipperary’s two early goals.

Cork have been a high-scoring team though. Curiously both counties had the same scoring total in their regulation fixtures – 9-113 each – but Cork’s aggregate was put together in the top division.

There is a sense about Cork that their forwards dance to their own music. Patrick Horgan has been supplying the usual substantial chunk of scores, mostly through his top-class free taking but Conor Lehane also chips in steady three- or four-point average and Séamus Harnedy too contributes significantly.

That ability to shoot points was invaluable in the semi-final, as Horgan kept the scoreboard ticking at a time when the team was being outplayed.

Will they get goals tomorrow? Tipperary showed it wasn’t impossible either through quick, early ball into the danger zone or fast, combination play creating the overlap and opening up the chance.

For all that the younger players have done exceptionally well for Waterford, they also rely on the veteran pair of Kevin Moran and Michael Walsh to add physical insistence and ball winning in the middle. If Cork can limit their influence, through Aidan Walsh, Harnedy and Mark Ellis in the central area Waterford’s challenge won’t run as smoothly.

Neither side is admitting that the upcoming championship encounter will have any impact on their approach to this but you wouldn’t know whether the odd thing might be held back but assuming it’s played largely on its merits it’s more likely that Cork will win.

Their ability to snipe scores almost regardless of the opposition will be harder to counter with even the most organised of defences.