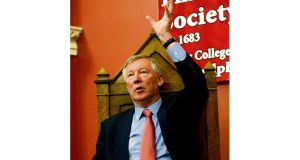 Manchester United manager Alex Ferguson, who was made an honorary patron of the Trinity Philosophical Society, speaking at last night's function in Dublin. - (Photograph: Lorraine O'Sullivan/Inpho)

IT’S AN eclectic bunch they bestow “patronage” on down at the Dublin University Philosophical Society. They’ve had Archbishop Tutu, John McCain and Salman Rushdie in recent years; Heather Mills, Pete Doherty and Naomi Campbell too.

Before Christmas fans of Jack White of the White Stripes caused a certain amount of mayhem when he came to visit but it was rather serene and dignified as Alex Ferguson dropped by last night to pick up the medal that traditionally goes with the honour and offer his thoughts to the 300 or so students who packed into the Graduates’ Memorial Building to hear his thoughts.

The Scot rewarded them with a thoughtful and entertaining guide to the achievement of success in life. It won’t come as any great surprise to those who have watched or dealt with him down the years that “hard work” and “control” are the key elements of his particular recipe.

If you come up short on the industry front you will suffer, he counselled during a wide-ranging and light-hearted address that took in such diverse topics as trade unionism, the changing nature of goal celebrations (might his expression of distaste for those involving “self-adulation” as well for ear rings and tattoos have been a barbed reference to a certain Argentine who had scored twice against his former club the previous night?) and the listening abilities of interior decorators.

Clear the bar in the control department, however, and Ferguson suggests it is those around you who may find themselves paying a price.

“I always thought that when I became a manager, and I experienced this in Scotland, that I had too much control, I was doing everything,” he observed. “But control is important . . . very, very important. Because if I lose control of these multi-millionaires in the Man United dressingroom, then I’m dead. So I never lose control. And if anyone steps out of my control, that’s them dead.

Ferguson might well lament the lack of control he has been able to exert over the fitness of his players this season and the veteran United boss revealed he now expects Republic of Ireland defender John O’Shea to miss the rest of the season. “He’s got a terrible injury at the moment,” he said. “One of those sorts of injuries that is unusual. It’s like a dead leg except a dead leg is usually only three or four days. The problem is that the blood clot became all knotted and when it gets knotted you get calcification so therefore it’s a long process to clear that up.

“He’ll probably miss the season now. It’s a bad blow for the boy. And for the team, because when you look at all the problems I’ve had with the back four this season, he could have played every single position.”

Less seriously, he also took a swipe at Shay Given’s father for nudging his son towards his own hometown some years back. “Shay was at United as a kid,” he recalled, “but his father wanted him to sign for Celtic so he went and signed for Celtic. “Silly bugger,” he added with a laugh.