Everything you know about hurling is wrong

Series of unpredictable results disprove a number of former theories 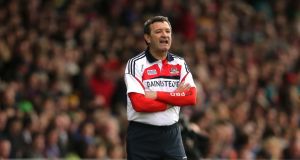 Cork manager Jimmy Barry Murphy: happy to air his views on the aspersions cast on his team’s fitness.

We hold these truths to be self-evident – or at least did until comparatively recently. The accumulation of weird events in the senior hurling championship might have been explicable when viewed one at a time and in isolation but in sequence it’s all turning out a bit like crop circles. Here’s how an established belief system was shaken to its foundations in a matter of a few weeks.

Modern realities have proved that Cork aren’t mushrooms and no more spring up overnight than redwoods
We live in an age of reason, hurling’s Enlightenment and the idea that Cork can simply defy resource issues like no underage – or for that matter, senior – success is no longer plausible. The idea that just because you’re playing a team in red jerseys you must beware regardless of all available evidence (as enshrined in the traditional maxim ‘Cark is Cark’), is so clearly laughable that it can have no modern relevance.

On Sunday, Cork came out against the gilded youth of Clare, who have already beaten them three times this year, calmly rode out the first-half storm and with apparent effortlessness glided to victory. This leaves them one win from a provincial title, a fast track into the All-Ireland semi-finals and a season stretching into the second half of August.

Not bad for a bit of compost and a darkened shed.

Sports science and state-of-the-art fitness and conditioning give teams an ineradicable advantage
Clare, forged on the anvil of military drills and simulated (or for all we know, actual) commando missions and whose fitness was so acclaimed in the Munster quarter-final, ended up blinking and unable to execute skills in the course of a high-pressure match.

Cork manager Jimmy Barry-Murphy has spent his hurling life more as an icon than an iconoclast but he was happy to air his views on the aspersions cast on his team’s fitness.

“Well, there is a lot made about fitness and all of this but we really had geared ourselves this year towards today. Last year we were super fit and there’s a huge emphasis among people in the media and people locally about fitness and the strength and conditioning and I think it is a load of rubbish to be honest with you, Dave Matthews, the same as he did last year, has done a great job with the players.”

Clare supporters and pundits are left like those intrepid punters on the fringes of race meetings, who swear the three-card trick chap won’t get them again.

Waterford: the end is nigh
It’s five years since it became clear that Waterford were unlikely to win an All-Ireland with the team that had hurled with so much flair for much of the decade. In each succeeding year the team, like a game of Jenga has seen blocks pulled out of its superstructure and yet it still stands, rickety but making progress in the qualifiers and keeping its place in Division One A.

This despite being tipped against in probably every match they played so far in league and championship.

On a chilly afternoon in Cusack Park manager Michael Ryan asked the media, who had gathered to get his reaction to beating Clare in the first match of the league, how many had tipped Waterford to win.

We moved swiftly on but few enough I’d imagine revised their overall views.

Of course they’re in transition and finding it harder to reach All-Ireland semi-finals but the inevitable consensus that they’d lose to Offaly last weekend went the way of so many other negative notices leaving Ollie Baker to call for championship reform, now as familiar a protocol for managers whose summer is over as the concession speech in politics.

Division One B: limbo or purgatory?
After all the talk about football’s infinitely greater social mobility, it’s the big ball elite who resemble a gated community in some Central American republic: viciously oppressive to those with less and apportioning to themselves increasing ratios of available wealth.

Hurling has become so aspirational that not alone has Division One B ceased to look like a housing estate built on a great pocket of pyrite but even Division Two A has produced a couple of performances with Laois beating one team ranked in a higher division and then running the Leinster champions Galway uncomfortably close.

So far the Munster champions have been beaten by a team from a lower division and the All-Ireland champions held to a draw. The stats will hardly get better for hurling’s second tier but what’s happened so far was supposed to be impossible given the disparities within the modern game.

It’s April. Why not just give it to Kilkenny and save time?
When’s the last time Kilkenny had so much difficulty in successive matches in Leinster? Yes, they are favourites to win the replay especially given Dublin’s general requirement for the cover of darkness before they give a big performance and yes, they have significantly influential players to return so talk of revolution is premature, but the labouring performances of June will greatly embolden the masses.

Qualifiers are killing the Munster championship
None of the above dogma has been set up as a straw man and this one certainly isn’t, as I – ahem! – wrote a dissertation on the subject just last month. Then yesterday, provincial chair Robert Frost declared that next month’s Limerick-Cork final (foreseen by nobody, least of all me) would be a virtual sell-out.

In other words everything I know about hurling is wrong.