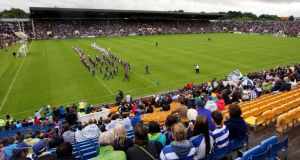 Croke Park is to host an American football colleges fixture in the autumn of next year.

Details are expected in the next few days of the meeting of Penn State and the University of Central Florida.

Notre Dame and The Navy sold out Lansdowne Road last year in a fixture that opened the colleges season.

Penn State’s football team was at the centre of controversy within the past two years when assistant coach Jerry Sandusky was jailed for child abuse, the college’s team subject to a range of severe penalties and legendary coach Joe Paterno fired in the aftermath.

Croke Park had hoped to stage a full NFL overseas fixture but the targeted event went instead to London.

Páirc Uí Chaoimh
Meanwhile the GAA is due to begin formal pre-planning talks on the Páirc Uí Chaoimh revamp and extension after councillors in Cork last night voted 23 votes to five in favour of the master plan for the Marina Park project.

Thirty-two public submissions were made regarding the draft Marina Park master plan, 25 of which were in the support of the project.

The objections to the park highlighted concerns such as traffic impact and land acquisition.

The Marina Park plan stretches the entire length of the marina from Shandon Boat Club on the city end to Blackrock Harbour.

The GAA plans to refurbish Páirc Uí­ Chaoimh and develop a centre of excellence along with an all-weather pitch on a portion of the former Showgrounds site.

The player is likely to argue his case on the grounds that he did not strike his opponent and secondly that he had been the target of racial abuse during the match.

Westmeath sources maintain that they have witness and video evidence in respect of the abuse.