Croke Park fight: Round by round report 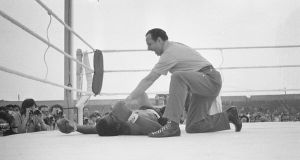 The pattern of the fight was set as early as the first minute when, after Lewis had mounted the initial tentative attack, Ali’s rapier-like punching with his left hand, took over. Although only at half-pace in the opening round , the former champion shook Lewis to his heels with two left hooks high up on the head and there was no effective response.

Lewis, pinned back on the defensive, showed some kind of confidence by casually sliding off the ropes as Ali mounted a two-handed attack but he produced little effective action to back it up, and Ali, depending almost exclusively on his left hand, took the first round by a wide margin.

Ali decided on a change of tactics at the start of the second, working industriously to the body and then, in one brief moment of inspiration, rocking Lewis with an overarm right to the head. Lewis deciding that attack was the best form of defence, attempted to move forward, but as he came in so Ali shortened his left hook and drove his opponent halfway across the ring with one perfectly-timed left to the temple.

In response to the crowd’s demand for the famous Ali shuffle, the former champion produced his now famous routine, but Lewis answered him in this steadily escalating psychological war by dropping his hands and calling on Ali to come to him. It was an invitation that did not go unanswered, and Ali, working both hands with lightning speed, produced big red weals around the Detroit man’s midriff.

Even at this stage the sap was beginning to leave Lewis’ aching limbs and the odd tentative lefthand was becoming progressively weaker. One round-house right stripped Ali of his confidence momentarily, but within a matter of seconds it was the old familiar picture with Muhammad relentlessly stalking his opponent.

A round that was to end in a blaze of excitment opened tamely enough with Ali prepared to essay nothing more ambitious than the occasional left hook to the head and body. Lewis, his mouth opening progressively wider, threw one solitary right-cross in reply, but still appeared destined to see out the round without any trouble when Ali suddenly unleashed a corking left hook to the chin which lifted Lewis clean off his feet.

As the referee tolled the count, Lewis did not. seem to have a hope of making it, but the bell sounded almost simultaneously as the count reached ten and so the Detroit man earned a reprieve.

Lewis, helped back to his corner in dire shape at the end of the previous round, presented a sorry figure by the start of the sixth and with Ali going all-out for a quick finish, the action was almost all one-sided. Ali, forgetting his earlier indifference, piled in left after left and when he began to “bring his right-hand into play it scarcely seemed possible that Lewis could survive the round”.

But, inexplicably, the former champion decided to ease off at that stage and spent the remaining thirty seconds of the round casually leaning against a rope as Lewis sought in vain to capitalise on his newly discovered reprieve.

If the bout was one-sided in the early stages, it was positively exhibition

stuff at this stage with Lewis offering nothing more substantial in defence than the infrequent, ineffective left-hook to the body. Ali, thriving in the latitude of it all. strode after him, firing put left and right hooks to the head and body and by the end of the seventh round the points discrepancy- was so pronounced as to be almost farcical.

Ali’s corner, still impatient for a big decisive punch , pleaded with their man to finish it in the eighth but the former champion, by now reduced to something like second-gear, had obviously decided that the time had not yet come for the pay-off. Content to toy with his opponent, he loosed jab af ter jab but there was no real sting behind them and Lewis, for all his deficiencies, was still erect at the end of the round.

This was unquestionably the best and most eventful round of the fight to date. Ali, again switching the tempo, tore into his tormented opponent with pile-driving hooks to the head and body and in one devastating barrage must have hit the hapless loser with at least thirty punches in as many seconds.

But Lewis, calling on the last ounce of his resilience. managed to survive and even drew a roar of admiration from the crowd by attempting to slug it out with Ali in the closing ten seconds of the round.

Ali sprang from his corner as if this might be the end of the road for Lewis but, surprisingly for all his industry and he was now earnestly working with both hands, he was unable to set up the sagging Detroit boxer for a decisive punch. Once or twice Lewis wobbled visibly on his feet but always he managed to escape to the centre of the ring before Ali could produce the pay-off shot that by this stage, looked only a matter of seconds away.

The attitude in the Lewis corner betrayed the sad but inescapable fact that their man was fast running out of strength, if not guts and after a minute 15 seconds of the eleventh round, they were helping the hapless Lewis back to the corner while Ali danced his familiar victory jig. A crunching left- hook on the jaw set ud Lewis for the initial collapse and as the former champion sprang in to drive home his advantage with a fusillade of punches, referee Lew Eskin decided to call it a night.

Klopp says Lampard can succeed at a club with more patience 16:21
Pádraig Harrington says Ryder Cup must go ahead in September 14:43
Allaho could be Ryanair bound after assured win at Thurles 14:13
Tadhg Furlong could be fit for Ireland’s Six Nations opener against Wales 13:18
Arsenal sign Real Madrid’s Martin Odegaard on loan 12:12