An unparalleled record of achievement, their longevity is as startling as their success. 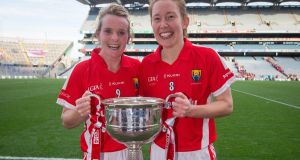 For anyone who has browsed through the history of Irish women in sport through the years, a name that always stood out was that of Kathleen Mills, her remarkable 15 All-Ireland camogie medals for Dublin, between 1942 and 1961, a record that seemed unbreakable. Until Rena Buckley and Briege Corkery came along, that is.

On the second Sunday in September, the pair equalled Mills’ medal tally when they helped Cork to victory over Galway in the camogie final, and a fortnight later they went to the top of the list when their county’s defeat of Dublin gave them a five-in-a-row and their 10th title in 11 years.

That, then, brought Buckley and Corkery’s collection to 10 All-Ireland football medals (a feat matched by Geraldine O’Flynn, Deirdre O’Reilly, Bríd Stack and Valerie Mulcahy) and six camogie. That’s not even mentioning their National League successes with Cork, and the number of All-Star awards they have amassed – over 20 between them. The pair have been nominated again for both the 2015 camogie and football awards.

It’s an unparalleled record of achievement. Such are the demands on today’s dual players, clashing fixtures not helping Buckley and Corkery this year, the training and match schedules hectic, their longevity is as startling as their success. Buckley also has to find time for her physiotherapy career in Ballincollig and Macroom, while Corkery is up, literally, at the crack of dawn to work on a dairy farm in Crookstown. And then there are their club commitments too.

Both players, though repeatedly insist they wouldn’t have it any other way.

“It’s my life, really,” said Corkery. “And I couldn’t imagine life without it. It’s where all my friends are. I’ve been playing with a lot of the girls since we were 12. Some friends meet up for a cup of coffee, a pint, or whatever; we meet up at training. It’s where I go to meet my friends. We don’t know any better. It’s about having the craic with your friends, that’s what I enjoy about it. And there’s nothing like a match at the end of the week.”

At this stage the pair almost regard each other as sisters, “we’ve been together since we were really young and that’s a long time ago,” said Corkery.

Still they are both just 28, a whole 10 years younger than Mills when she won her 15th All-Ireland medal. There might be another chapter or two in their stories just yet.

Previous Monthly Winners December Ann Marie McGlynn (Athletics) The Offaly woman captained the Irish senior women’s team to an unlikely bronze medal at the European Cross-Country Championships in Bulgaria, combining with Fionnuala Britton, Sara Treacy and Michelle Finn to beat France by a point to a place on the podium. January Gráinne Dwyer (Basketball) For the second year running, Dwyer was the MVP in the National Cup final, this time driving Team Montenotte, Glanmire to success over Killester, top-scoring in the game with 20 points.

The driving force behind Ireland’s Six Nations victories over Italy and England, the 28-year-old lock going on to play an equally influential role in the wins over Wales and Scotland that clinched a second title in three years.

The Irish captain led the team to a memorable Six Nations success, one that included only their second ever victory over world champions England. Briggs marked her 50th cap by contributing 23 of Ireland’s 73 points in the mauling of Scotland that sealed the title.

The Kildare jockey became only the third woman, after Ann Ferris in 1984 and her sister-in-law Nina Carberry in 2011, to win the Irish Grand National, riding the Sandra Hughes-trained Thunder And Roses to victory at Fairyhouse.

Maguire, a student at Duke University in North Carolina with her twin sister Lisa, reached the top of the world amateur rankings after three tournament wins in her first season in the United States, and was voted top female US collegiate golfer of the year. Fellow Ulsterwoman Perry, meanwhile, called time on a professional squash career that saw her reach the heights of the third-ranked squash player in the world. She signed off in style, winning the Irish Open and helping Ireland win bronze at the European Championships in Denmark.

Taylor won her 18th consecutive title at the European Games in Baku, her victory over France’s Estelle Mossely in the lightweight final leaving her as the holder of the Olympic, World, European and European Games’ titles all at the same time. She has now collected every major title there is to be won.

The Dublin teenager excelled for the Irish basketball team at the Special Olympics, starring throughout, including in the gold medal-winning match against Mexico on the final day.

An encouraging summer for Egan as she attempts to qualify for Rio 2016, the highlight her winning of Ireland’s first senior European sprint medal when she took bronze in the K1 5,000m final in the Czech Republic. And in August she was just two seconds off another medal at the World Sprint Championships in Milan.

1 Seán O’Brien: Anger over my parents’ break-up never left me
2 Ireland get the job done against Italy to keep alive Six Nations hopes
3 Ireland 50 Italy 17: Ireland player ratings
4 Hugo Keenan and Will Connors: The best of friends, the best of debuts
5 France warm up for Ireland with impressive win over Wales
Real news has value SUBSCRIBE
Here is your handy guide to sport on television this week