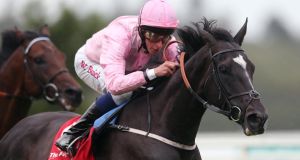 William Buick renews his partnership with The Fugue in the Breeders’ Cup Turf on Saturday and has also been selected to ride for Ballydoyle. Photograph: Getty Images

Any bygones appear to have been let bygone by Aidan O’Brien who has entrusted the mount on one of his two runners in Friday night’s $1 million Breeders Cup Juvenile Turf to jockey William Buick.

The English-based rider is in Santa Anita principally to ride The Fugue in Saturday’s Turf over a mile-and-a-half but he has also been snapped up by Ireland’s champion trainer for Wilshire Boulevard.

Ryan Moore will be on board the apparent Ballydoyle number one in the race, Giovanni Boldini, but Wilshire Boulevard, who will start from stall nine, is as low as 7 to 1 in some ante-post lists for the race.

It’s only five months since a controversial Epsom Derby win for O’Brien with Ruler Of The World saw Buick subsequently ruing a slow early pace in the blue-riband event, in which he finished a fast-finishing runner-up on Libertarian.

Critical Buick remarks
Afterwards Buick appeared to suggest the Ballydoyle horses deliberately set out to get the favourite, Dawn Approach, beaten by setting a slow pace in the early stages of the race.

He was quoted: “It was a slowly run race which caught us all out except for the jockeys riding for Aidan O’Brien. We all thought it would be a fast pace, but it wasn’t.”

Asked at the time if he thought that intentional on the part of the Ballydoyle team, he added: “Definitely. They got the favourite in trouble as he didn’t settle. It would have played to their strengths.”

Buick was criticised in some quarters for those comments but they are likely to be definitively put to bed if Wilshire Boulevard, named after a famous street in nearby Los Angeles, can secure his finest moment to date at the Santa Anita track.

Fourth in the Group One Prix Jean Luc Lagadere at Longchamp on Arc day, the son of Holy Roman Emperor, bred by the former head of Horse Racing Ireland, Denis Brosnan, had previously finished runner up in the Gimcrack at York and won the Group Three Anglesey Stakes at the Curragh in July.

It will be Wilshire Boulevard’s first start at a mile in a race O’Brien has won for the last two years and in which Giovanni Boldini will start from stall two.

Ballydoyle’s star Declaration Of War will start from an ideal stall-five draw in Saturday night’s $5 million renewal on dirt. But O’Brien’s Turf hope Magician will have only one outside him when he starts from stall 11. Cristiforo Colombo in the Mile is drawn nine of 10.

Classic debut
Declaration Of War will be Joseph O’Brien’s sole Breeders’ Cup ride over the two days and it will be the Irish champion jockey’s first ride in the Classic. It is two years since he announced himself on the international scene with St Nicholas Abbey’s memorable Turf success at Churchill Downs.

O’Brien will have to make 9st for the culmination of America’s most valuable meeting, as will Ryan Moore who will start from stall three on the Marco Botti trained Planteur.

1 CVC cuts Six Nations offer by half to €165m as talks continue on new deal
2 Game Changers: Living beyond fear puts Alex Honnold above all others
3 Georgia and Fiji in line to join Six Nations sides in eight-team tournament
4 Chelsea talk the talk but still struggling to walk the walk
5 Game Changers: Gary O’Toole took a stand when others turned their heads
Real news has value SUBSCRIBE
Here is your handy guide to sport on television this week