“I knew there was going to be a fallout, but I didn’t realise how big” – Gatland 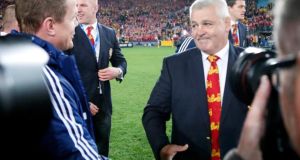 There were so many sporting profiles in courage the past week it was easy enough to lose count, although Eoin ‘Bomber’ Liston’s brave attempt to be nice to Australia on TG4 after that Croke Park 37-116 hiccup on Saturday evening was hard to top.

“They might want to bring a stronger team next time,” was the gist of his sympathetic, not to say compassionate, suggestion come the end of all four quarters, when there must surely have been a temptation to Riverdance across the pitch while warbling “retreat Australia, (you’d a) ‘mare’.”

He was bigger than that, though, and you couldn’t but detect a hint of regret that he hadn’t been out there on the pitch, the quality of the Aussies’ defending of their onion bag at times such that he’d most likely, despite being 56ish, have helped himself to a couple of dozen goals. At least.

It was a relatively civil affair too, which possibly disappointed a crowd anticipating a rumble in the Dublin 3 jungle, the last quarter largely featuring TG4 shots of them yawning as they waved their flags in response to yet another Irish onion-bag-buster.

This series, you could only conclude, needs tweaking.

Second only to the Bomber in gallantry the past week was Lions supremo Warren Gatland who was plucky enough to turn up on the Late Late Show, which is recorded in Dublin, home of, you know, the BOD fella.

On the whole, Late Late audiences are as civil as Saturday’s fare at Croke Park, most of them too busy waving at their Grannies at home to turn ugly on a guest, but when Gatland was introduced and appeared atop those Late Late steps, you half feared the audience turning in to a lynch mob and shredding him limb from limb.

No worries, it was timid enough, the applause perfectly polite, Gatland placating to whom it concerned by conceding that dropping the BOD man was “the toughest thing I’ve had to do in my coaching career”.

“Sometimes you’ve got to make decisions that aren’t always the most popular,” he said.

“I knew there was going to be a fallout, but I didn’t realise how big.”

Grand. But then he revealed that when he went home to New Zealand there was divil a question from his fellow Kiwis about BOD’s axing from the Irish (and British) Lions, the insinuation being that our angst about the issue of was a bit parochial. As if, like.

A week before, of course, the BOD man himself was on the Late Late, leaving you wishing the two had appeared on the same show, with live Green Room footage of them exchanging Christmas cards. That would have made most excellent telly.

A bit like all those rumours about ITV signing up Alex ‘Sir’ Ferguson as a pundit for their World Cup coverage next year, when he would sit alongside Roy “I don’t think Alex knows the meaning of the word loyalty” Keane. It’d make the Rumble in the Jungle look like Billy Elliot.

Would Roy give his former gaffer as tricky a time as, say, Channel 4 News’ Jon Snow?

JS: “The interesting thing about you is you brought on all these incredible star players, Keane, Beckham, van Nistelrooy, and yet you fell out with all of them.”

It was a rather stupendous exchange, as was the moment Snow raised the issue of Ferguson’s BBC ban because of that Panorama thingie on his son, the knight’s eyes narrowing so much his pupils all but disappeared from view.