Why should the Kop choose to care if its striker/asset doesn’t? 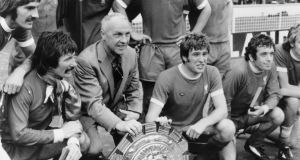 Bill Shankly with Liverpool players after a Charity Shield victory. “Shankly chose to believe football was about more than ‘assets’ and was able to convince a city he was right.” Photograph: Evening Standard/Getty Images.

Bill Shankly and Mario Balotelli: one a near-mythical figure representing Liverpool as it still likes to see itself, the other as it is. The 33rd anniversary of Shankly’s death took place recently.

He basically created Liverpool football club, no bad legacy for a Scot sent down an Ayrshire mine at fourteen. He was also the man who inflicted a spectacularly stupid piece of faux-profundity on the world.

It’s hard to believe Shankly could have been serious when uttering the masterpiece of crass – “people believe football is a matter of life and death: I can assure you it is much more important than that” – that invariably gets quoted by those struggling to convince either themselves or everyone else about sport’s importance.

Sport is important. It’s very serious indeed to those who choose to take it very seriously. That there is a choice is a hardly furtive clue to its priority. Real life and death stuff leaves no choice at all. Shankly’s experience as a child down the mines led to him supposedly having a fetish for fresh air all his life.

It’s hard to believe such a man could mistake the raw distinction with a straight-face. The talent for football that allowed Shankly escape depression-era unemployment in the early 1930’s was also no choice. He was fortunate to have it.

But exploiting that talent was a choice Shankly did make and throughout his football life the idea of not making the most of talent was something he abhorred.

However, that was a time when making the most of your talent had a fundamental impact on the size of your wage-packet. It was also a time when those standing on the terrace idolised players whose own lives largely mirrored those of the fans paying to see them. And it was a time when a football manager could proclaim his socialism with a straight-face.

“(Robert) Burns was an early socialist,” he once said. “The first was Jesus Christ. He didn’t think God made people to be unequal. He thought everyone should share in the work and the rewards.”

There is a danger of drifting into cod and convenient psychobabble when it comes to describing the relationship Shankly enjoyed with Liverpool fans. There is always a stark correlation between any love that might exist for a football manager and the final score. However, only the chronically unimaginative can argue success alone is responsible for the iconic status he continues to enjoy in Liverpool. Shankly believed passionately it wasn’t just about the team on the pitch, but who, and what, that team represented.

The one thing guaranteed to defeat sentiment though is indifference. And it’s curious to speculate on what Shankly would have made of Balotelli, a figure who’s every movement and utterance indicates an interest in little beyond mammoth self-absorption.

Liverpool reportedly paid £15 million quid for him in order to help replace Luis Suarez who did at least have the virtue of being almost maniacally driven in his efforts to score goals.

The evidence suggests that mania’s primary motivation was financial but the Kop could plainly see Suarez was at least trying. There are times when Balotelli quite plainly isn’t bothered at all. At least he is consistent in this haughty disregard for exploiting his talent.

Years of evidence was clearly immaterial though to the Liverpool board who signed him primarily on the basis it seems of putting an “asset” on the balance sheet that made their numbers look good.

Why should Balotelli bother to disguise his carelessness if he keeps getting paid millions? But even allowing for all that, it’s tempting to view Balotelli’s arrival at Anfield as a definitive “Ciao” to any illusions Liverpool fans might choose to have about their club being more than another consumer vehicle to relieve them of their hard-earned cash.

Suarez’s behaviour was disgraceful at times, but he scored goals, the football currency that excuses everything. In comparison, Balotelli’s behaviour is mostly adolescent rather than distasteful.

Yet it manifests itself in an on-the-field demeanour that suggests he can’t be arsed, surely the gravest of football’s mortal-sins which, when donned in Liverpool red, grates all the more.

Why should the Kop choose to care if its striker/asset doesn’t? Shankly chose to believe football was about more than “assets” and was able to convince a city he was right. It was never life-and-death. But it did seem to mean more to more people than just another balance-sheet. Maybe he was deluded, or maybe he was full of it. Or maybe it simply shows how 33 years is a long time.