The ‘Irish Times’ Best Sports Club in Ireland competition has almost 1,000 entries so far, from 31 counties. Enter and you could win up to €5,000 for your club 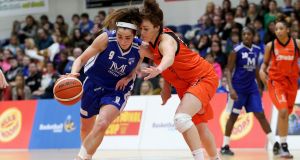 Top pitches: the competition has had strong nominations for basketball. Photograph: Ryan Byrne/Inpho

The Dubs lead the nominations in the Irish Times Best Sports Club in Ireland competition. Clubs in the capital now have 330 nominations – a third of the total. Co Cork has crept into second place, with 73 entries, closely followed by Co Carlow, with 71. But, as our map shows, the competition has a huge geographical reach. Clubs from every county in Ireland bar Fermanagh have been nominated for the award.

Almost 1,000 of you have now entered your favourite club in the competition. And if you read the sample of entries that follows, they haven’t all come from “high achievers, muscle-bound lads with rock-hard abs or supertoned, fit young ones”.

If, like Sinéad Fagan of Aer Lingus Ladies Basketball Club, whose quote we have purloined, you feel like playing for “Team Middle Age” and entering your own sports club, go for it. You have nothing to lose but your chains – and maybe your spare tyre.

The Irish Times Best Sports Club in Ireland competition is here to reward both endeavour and inclusivity, and our esteemed judges, the Grand Slam-winning rugby international Fiona Coghlan, the Irish Times online sports editor, Noel O’Reilly, and the GAA journalist Jerome Quinn, will see that fair play is maintained.

The games have already begun, of course, and the clock will stay running until Sunday, May 15th.

So here’s what to do: write a short pitch – no more than 500 words – for a club you love. Submit it at irishtimes.com/bestsportsclub and your club could win €5,000, with a further €1,000 going to another deserving entrant. Both awards are courtesy of the competition’s sponsor, the National Dairy Council. The winning club will be announced next month.

Tallaght, Dublin
“Killinarden Angling Initiative was formed to offer people an alternative to mainstream sports, and to offer a sport that is fully inclusive to everyone. We deliver training programmes that range from team building and alcohol- and drug-awareness to ecological and environmental awareness.

“Over the past two years we have trained over 50 youths to become competent anglers and entered 30 youths into five national championships. We coach youths with all manner of disabilities, from ADHD to Tourette’s.

“The reason Killinarden Angling Initiative is the best club in Ireland is because we offer something no other group in Ireland can: a pastime, hobby or competitive sport that is completely inclusive to all ages and disabilities.”
Patrick Ryan

Co Limerick
“Newcastle West Camogie Club is the best because it encompasses everything that is fantastic about community spirit. The club has underage teams all the way up to senior level, which is great for the progression of our girls. We are hard-working, determined girls and return each season, even through hard times, with our heads held high and as a team of friends. Sport is life to us. We come back every year with a new faith and belief that this will be ‘our year’.

“We pay a small fee each week, just to try and keep the club going with hurleys, and to pay for referees and not to be constantly asking money from the same people every year. It’s social, it’s pride, it’s passion, it’s escape – and of course it is a very fun way to meet everyone you have known since you were little.”
Patricia Liston

Swords, Dublin
“We are a basketball team of mostly older mammies, a lot of us over 40 years old, some over 50 – one of the ladies has been playing with the club since 1978. We play in Dublin division 2, which is pretty good going considering we’re getting on a bit. Most of the teams we play against are quite a bit younger than us. Sometimes we play against girls who come into the sports hall still wearing their school uniforms, and often their mammies and daddies are on the sideline, watching them play. Thankfully, experience stands up against youth, so we hold our own.

“We know that a lot of the teams who will enter this will be high achievers, muscle-bound lads with rock-hard abs or supertoned, fit young ones, winning competitions and with their sights set on big prizes. You could say we’re the opposite.

“As we’re middle-aged women, people often write us off, and that goes for off court, too, but we’re busy ladies, working women, minding families and running households, and still we play. Every week we do it.

“We support each other: through births, death, marriage and divorce. We scream at each other, we bitch, we moan, but each season, we always come back for more . . . Isn’t that what being in a club is all about?”
Sinéad Fagan