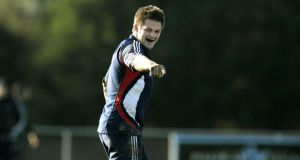 The luxury of selecting an extended All Blacks squad as he fine-tunes his final World Cup preparations has also allowed coach Steve Hansen to cast his mind further ahead towards the British and Irish Lions tour in 2017.

Hansen named five new caps in his extended 41-man squad on Sunday for their five Tests ahead of the World Cup before he cuts it to 31 on August 30th for the global showpiece.

The decision to pick an extended squad has two functions, with the All Blacks opening their Test season on July 8th against Samoa just four days after the Super Rugby final, meaning the coach may not be able to rely on his full squad.

The second is that several of Hansen’s veterans have already said they will leave New Zealand rugby at the conclusion of the World Cup, while others are expected to retire, and he needs to begin rebuilding his side before the Lions tour.

“I think that’s the interesting thing about the 41. If we could have we could have named 50 guys who were good enough,” Hansen told Sky Sports in Auckland after he named the squad.

“So a little bit of the 41 selection is about 2016 as well. It’s not just about the end of the year.” Injuries to likely World Cup contenders like Aaron Cruden, Patrick Tuipulotu and Nathan Harris had also forced Hansen’s hand, while memories of the 2011 tournament when the team faced a crisis at outhalf had been a factor.

The All Blacks were forced to rely on fourth-choice outhalf Stephen Donald to play the final after Dan Carter, Colin Slade and then Cruden, himself a late call-up, went down injured.

The selection of Otago Highlanders outhalf Lima Sopoaga was a nod to those fears as well as 2016 with Carter and Slade heading offshore, while Beauden Barrett is tipped to bid for Olympic gold in the sevens at the Rio Games.

“Lima has come right on to his game this year and . . . it’s definitely an opportunity to let him come in and see what the group is about,” Hansen said of the 24-year-old Sopoaga.

“He may even force his way into the 31 we take to the World Cup, but it was too good an opportunity to miss to not give him an education.”

Hansen added that openside flanker Matt Todd’s selection in the squad ahead of the dynamic Ardie Savea had been due to Todd’s greater experience having already played two Tests.

With captain Richie McCaw and heir apparent Sam Cane almost certain to be at the World Cup, Hansen said it was highly likely that Savea, Todd and Cane would all be in the All Blacks next year if, as expected, McCaw retires.

“A tough selection between Matty and Ardie, who has been in outstanding form,” Hansen said. “But we just felt that Matty has played really well for us when he has played.

“Obviously Sam and Richie if they are both playing well will go to the World Cup but we need to have somebody on standby, if not one probably both.

“We know that Matt can [play international rugby], but you are talking about two guys in 2016 who could both be in the team.”